During the Edwardian era in Britain (1901 to 1911) over 1.5 million men and women were employed as servants in the homes of the wealthy. Being ‘In Service’ was a way to escape poverty, but it was not the relatively comfortable life frequently illustrated in today’s media.
845612 min
SUBMIT YOUR WORK
HoursMinutesSeconds

Julia Fullerton-Batten – During the Edwardian era in Britain (1901 to 1911) over 1.5 million men and women were employed as servants in the homes of the wealthy.  Being ‘In Service’ was a way to escape poverty, but it was not the relatively comfortable life frequently illustrated in today’s media.

It was hard work, and there was exploitation and abuse, some of it sexual in nature. “In Service” exposes some of the going-on behind the walls of the houses of the privileged class in that era.

A scullery maid in a great London house in the early 1900s was the lowest rank of servant. She had to do the most menial of tasks, scrub the floors, wash dishes and clothes, carry heavy buckets full of water, iron using primitive flat-irons heated on the stove, clean the fireplace and front steps, polish shoes and boots of everyone in the household – also those of fellow servants – even iron shoe-laces. Starting in her early teenage years she would have had hopes in time of working her way up to better positions, perhaps a maid at table or a lady’s maid waiting on the lady of the house. 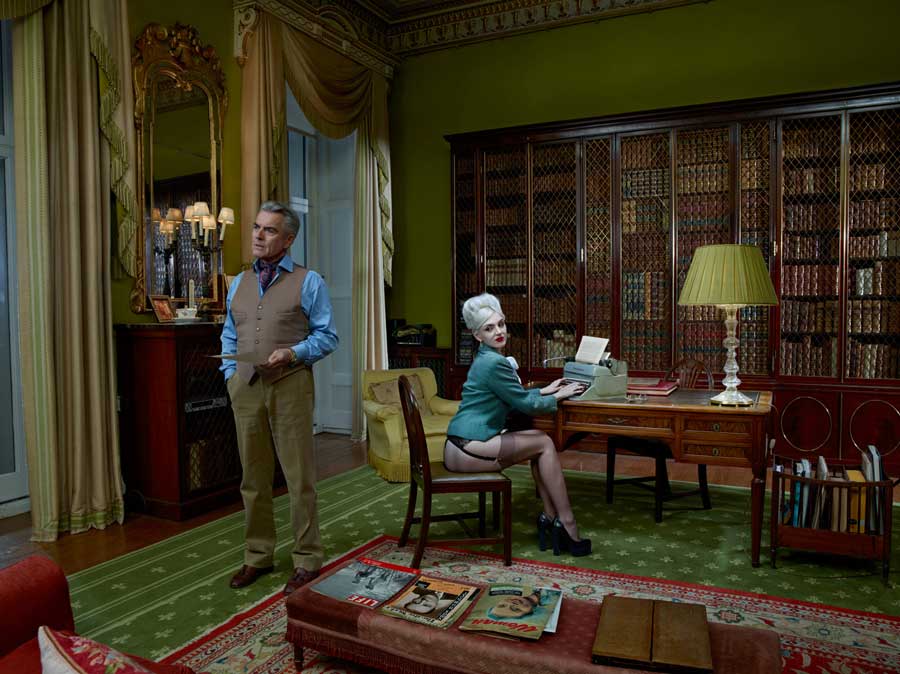 There were many levels of staff employed, some great houses employed staff in considerable numbers. Status was just as important among servants as it was elsewhere in society; the cook was responsible for all kitchen staff, the butler for all the staff engaged in the daily running of the house.  The upper rank servants were entitled to hire, discipline and dismiss those for whom they were responsible. With the privilege of power it’s not surprising that there were many reports of servants abusing other, lower ranking, servants.

Male employers often looked to female servants as sexual partners. It was also not unknown for a lady of the house to form a liaison with male members of staff, as described by D.H. Lawrence in his notorious exposé of morals of the time, “Lady Chatterley’s Lover”. Gay sex between males was prohibited by a law passed in 1885 and was punished by imprisonment. Despite this, there was a significant upsurge in homosexuality in this era, especially among the intelligentsia and upper class. Notoriously, the famous playwright, Oscar Wilde, was sent to prison in 1897 after being arrested for ‘gross indecency’.

It was probably difficult for servants to resist the advances of their employers. Many may have thought that such a relationship would enable them to escape their lower class status. Affairs of this kind were secretive as both partners feared being caught. For servants the consequences were inevitably life-changing. If an affair did come to light, the servant would be immediately dismissed and thrown back onto the street. Being caught in a gay relationship could mean both participants would end up in prison.

Another risk was pregnancy. This would result in both loss of job and disgrace for the mother-to-be. Many expectant mothers ended up in a workhouse until the birth took place, then the baby was adopted and the mother left to restart her life. Some new mothers became wet-nurses, breast-feeding the babies of rich mothers, who either couldn’t or didn’t want to breastfeed their children themselves. Earlier, Queen Victoria had set a trend as she chose not to breast-feed any of her own nine children, complaining that she suffered enough in pregnancy and these had already ‘robbed’ her sufficiently of her powers as queen. 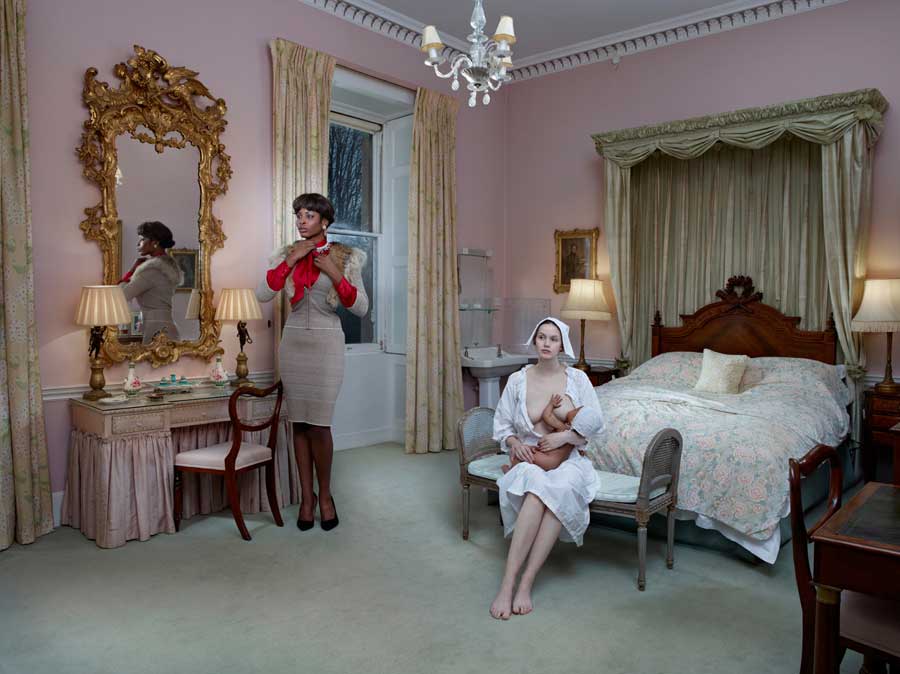 “In Service” concentrates on amoral episodes that took place in some of the stately homes of Britain during the Edwardian era. I was fortunate to find three stately homes in the south of England that provided eminently suitable backdrops for shooting the series. Built in the 18th Century their interior decorations closely resemble those found in grand houses in the Edwardian era. I dressed the servants in authentic Edwardian era style clothing. To heighten the class difference I went for a contrast in fashion styles and  dressed some of the female employers in clothing designed by Alexander McQueen and Chanel.

As an interesting side-note, one of the houses, Gaddesden Place, was rebuilt after it was almost completely destroyed by fire in 1901. Although everybody was evacuated from the building before the fire took hold, a butler and a footman were killed when they returned wine to the undamaged wine cellar and an interior wall fell in on them. [Official Website] 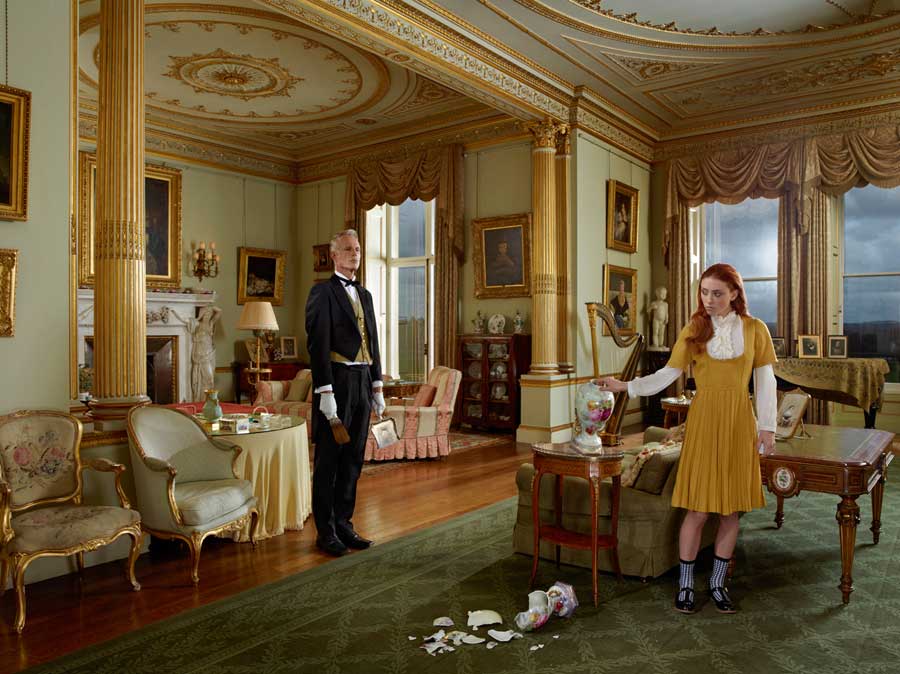 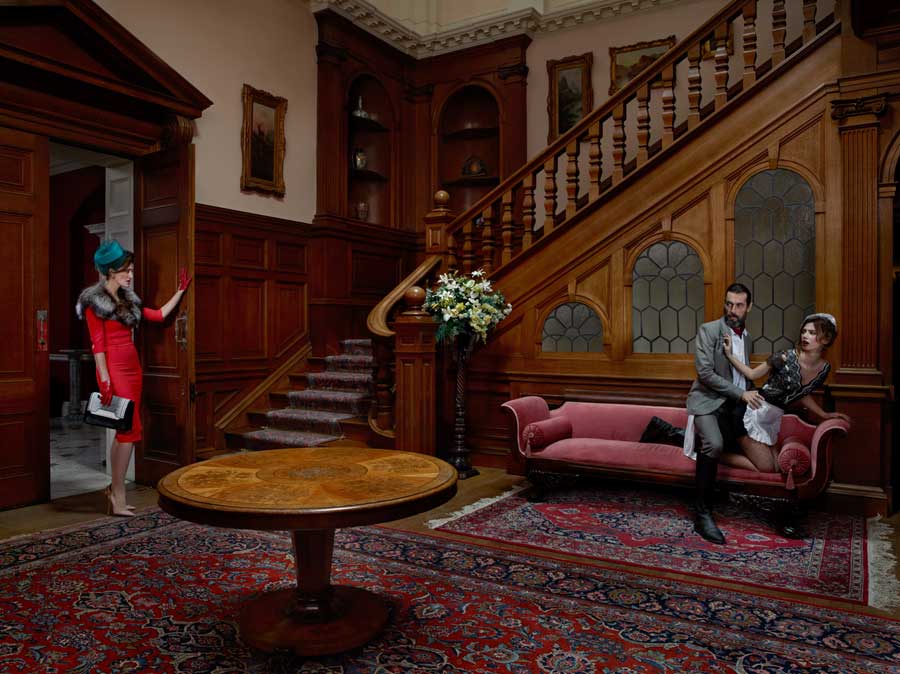 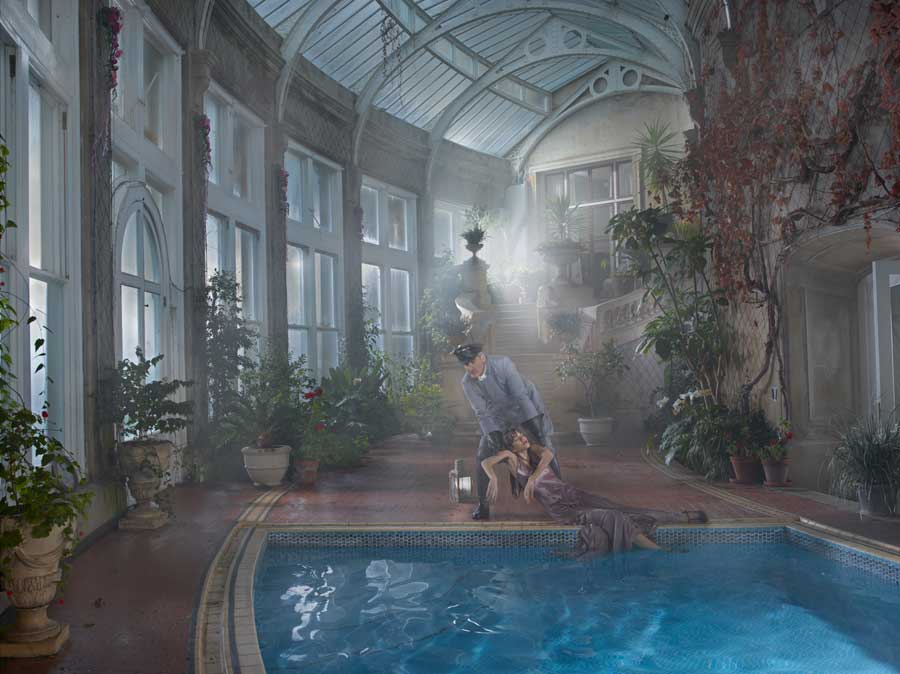