A walk in Solidarity to unite the LGBTQ community against various Govt. injustices. About 20 years ago on the 2nd of July a group of 15 people decided to march together to raise their concerns and make a political statement for Equality
108111 min
SUBMIT YOUR WORK
HoursMinutesSeconds

A walk in Solidarity to unite the LGBTQ community against various Govt. injustices.

About 20 years ago on the 2nd of July a group of 15 people decided to march together to raise their concerns and make a political statement for Equality, Love, Solidarity and Tolerance irrespective of gender, sexual orientation and religion. Thus giving birth to the oldest Pride Walk of India and South Asia. The Kolkata Rainbow Pride Walk (KRPW) has ever since seen the LGBTQ community unite and walk the streets of Kolkata with the Rainbow Flag held high. 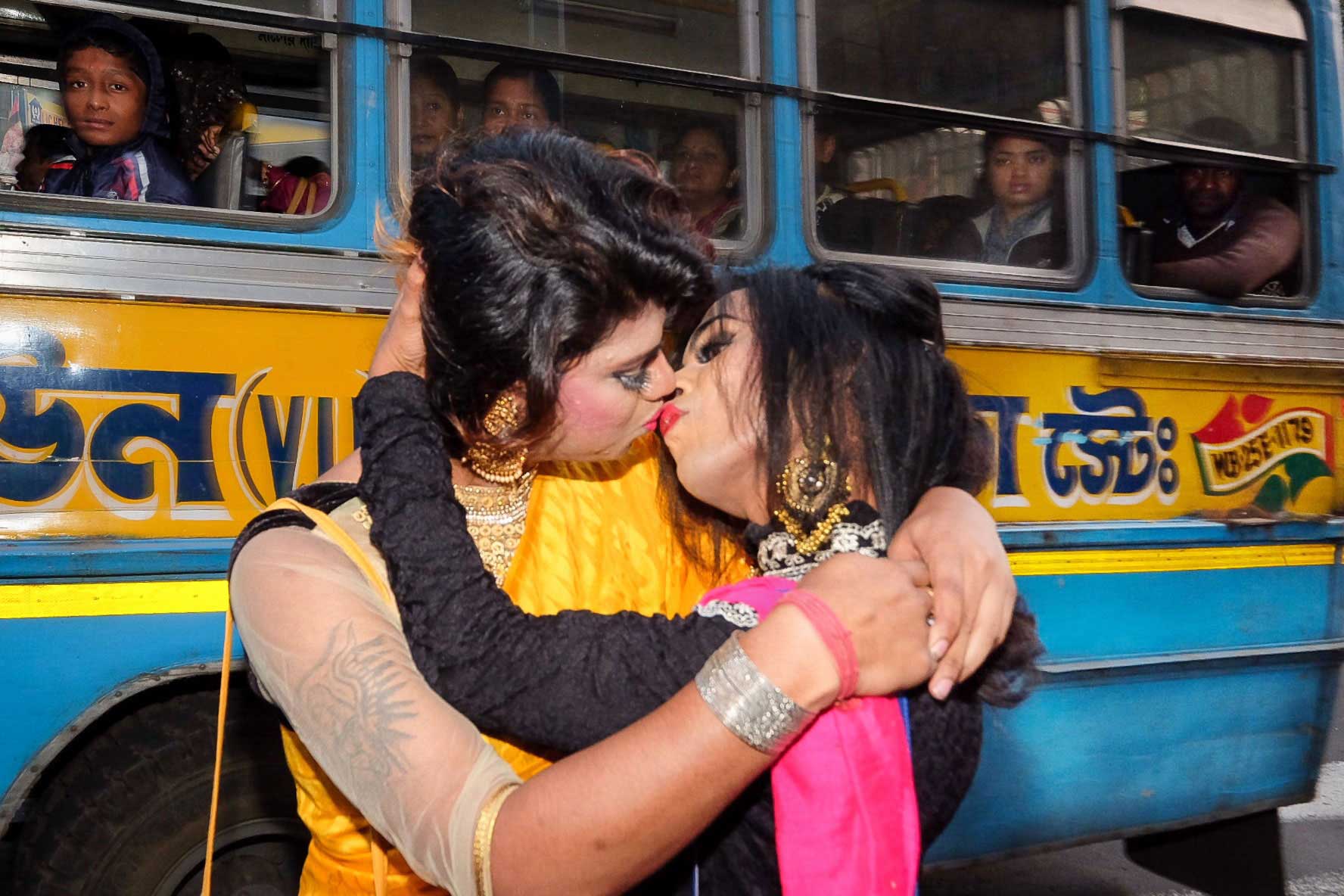 The masterminds behind the above movement were two Muslim individuals named Owais Khan and Rafique-ul-Haque-Dowja-Ranjan. The primary objective of this demonstration was to raise a voice against various social issues which tend to be against the rights of individuals particularly from the minority LGBTQ community. After the maiden walk in 1999 there was no further walk until 2003 when Rafique-ul-Haque-Dowja-Ranjan rekindled the idea of hitting the streets. This time around 50 people joined in. The number increased four fold to 200 the very next year in 2004. Based on the incredible response the walk in 2005 was a week long celebration which hosted film festivals, seminars and media briefings. 2011 saw 6 women participate in the Pride March for the very first time. The year 2014 had a massive 1500 people joining in which saw a 25% rise in women participants alone. 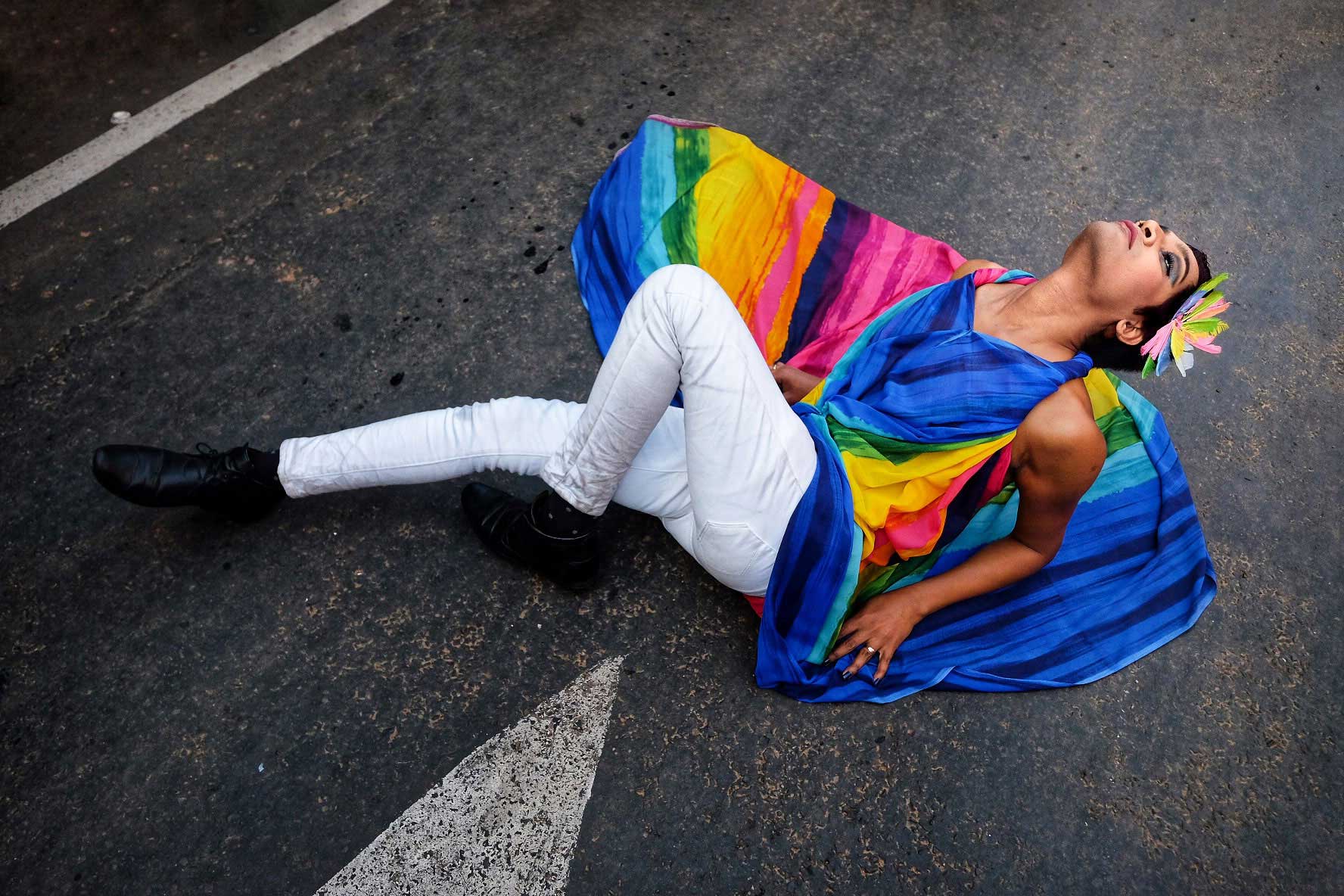 The primary agenda for this year was promoting tolerence towards diversity and talking about the NALSA (National Legal Services Authority) judgement, which recognizes the legal and constitutional rights of transgender people, the rights of the eunuch community, and the right to gender self-determination. 2016 was the year of ‘Law and Rights’. The participants and organizers of the Kolkata Rainbow Pride Walk demanded the revocation of Section 377 of the Indian Penal Code to exclude consensual same-sex activity from its purview. They said that the Transgender Persons (Protection of Rights) Bill, 2016, should be withdrawn and demanded the introduction of a new bill incorporating the community’s input. 2018 was a landmark year in the history of the KRPW as a part of Section 377 was read down by the Supreme Court on 6th September 2018 thus rendering consensual sex between two individuals of the same gender NOT a criminal offence anymore. Although the Pride Parade happily celebrated the reading down of Section 377, it simultaneously also protested against the Transgender Persons Bill, 2016 introduced by the Union Ministry of Social Justice and Empowerment, Government of India, subsequently passed by the Lok Sabha.This Bill demands Transgenders to provide a medical examination report in order to be recognized as trans-people.Such a legislation only reintroduces surveillance by the government. 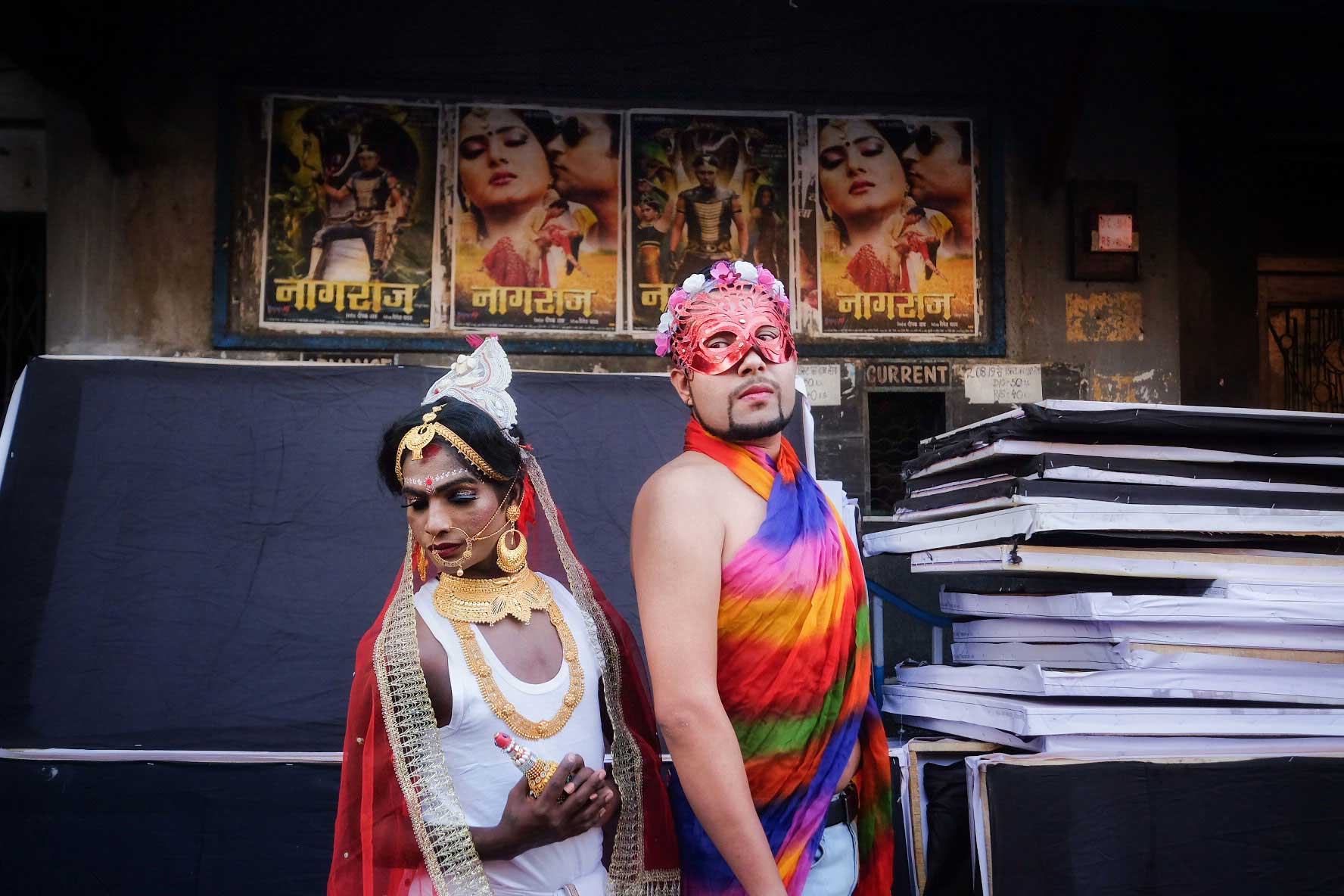 The agenda for 2019 was raising concern against the implementation of the Citizenship Amendment Act, 2019 and the proposed National Register of Citizenship (NRC). A statement issued to The Times of India among others, said, “We fall at the crossroads of multiple identities and all these measures taken by the Govt affect us adversely in many ways”. In such a case none of us queer or not, are safe”. The community members felt it would be inappropriate to distinguish them basis the NRC and CAA as many of them had been disowned by their families without proper documents to prove their identity. 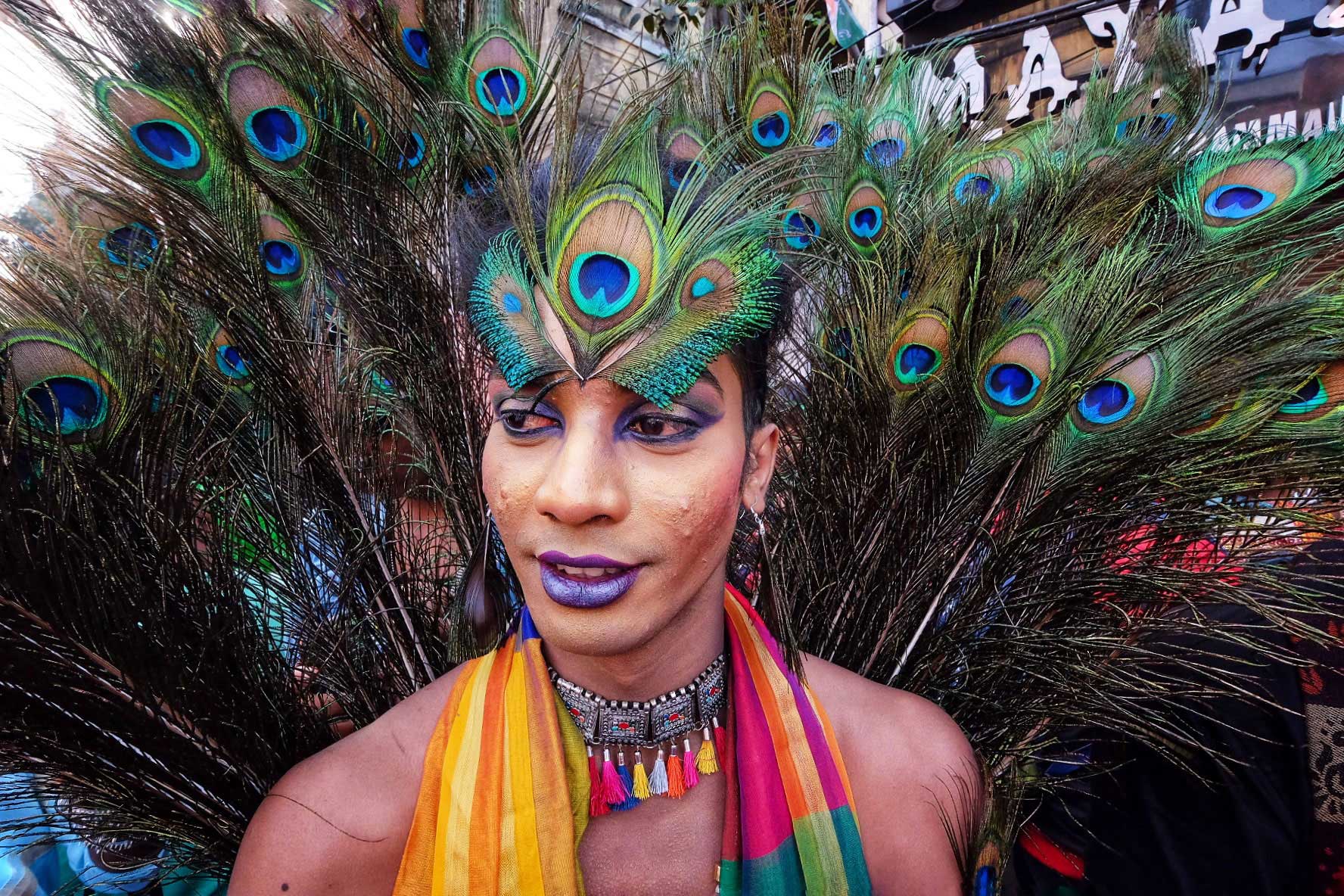 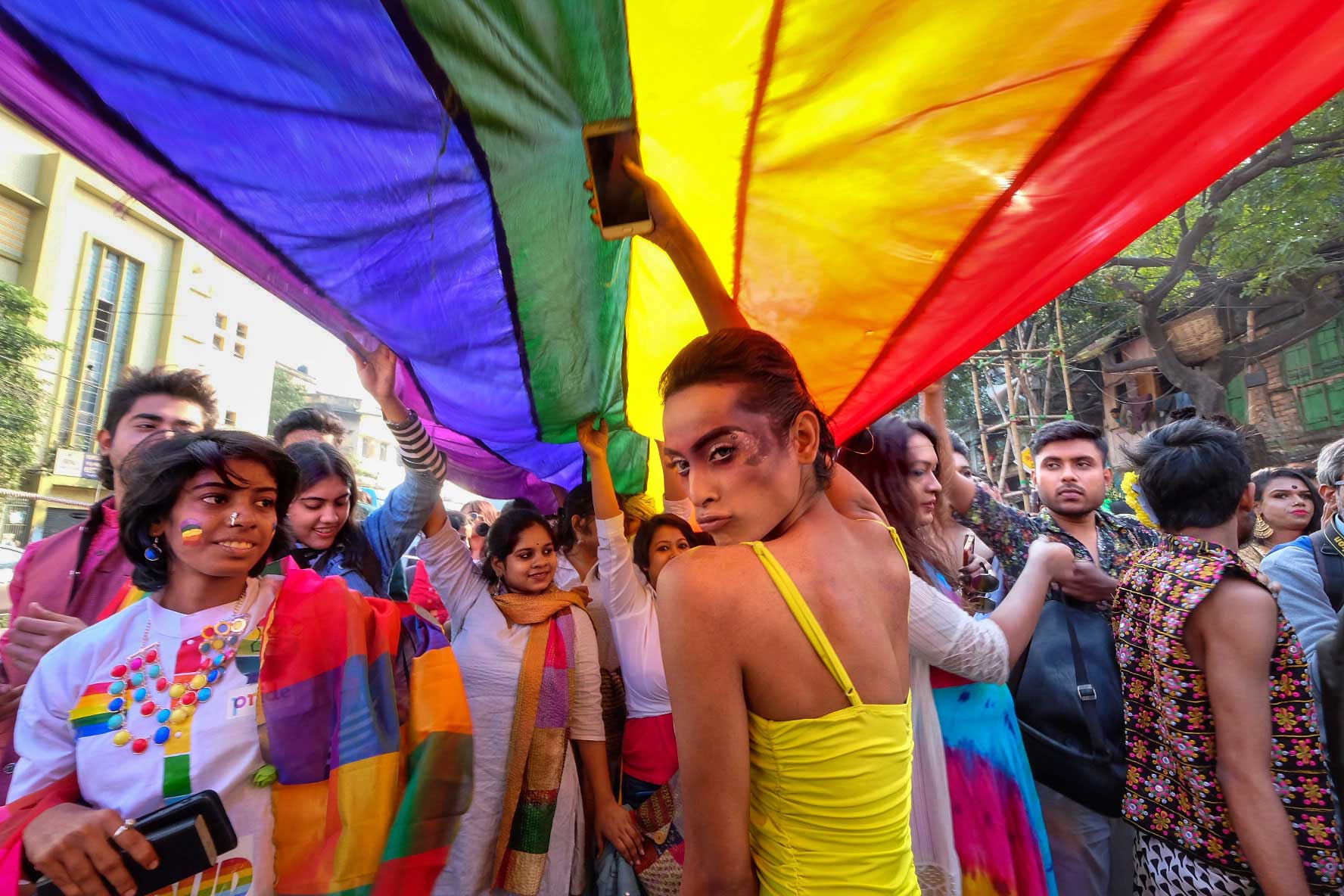 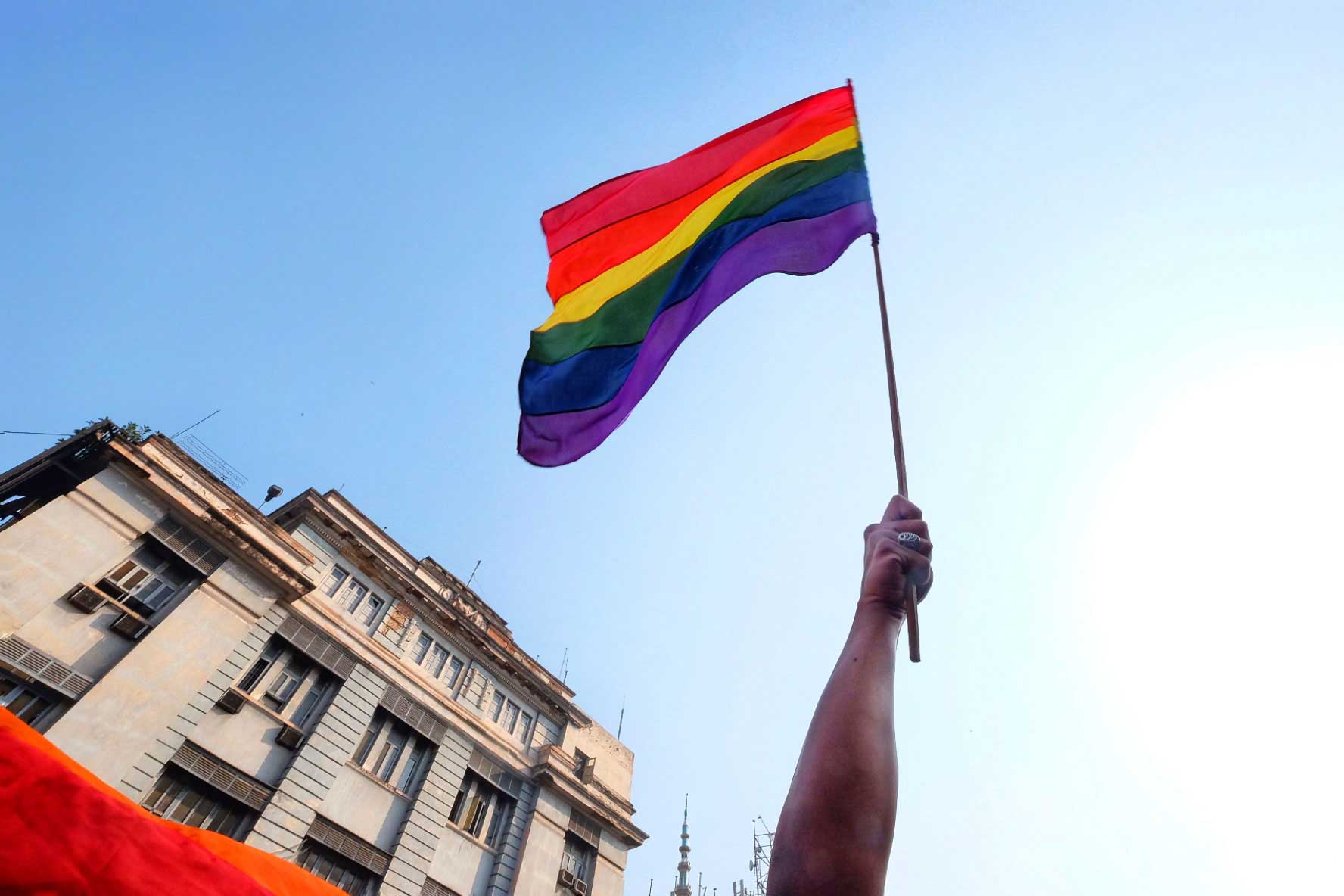 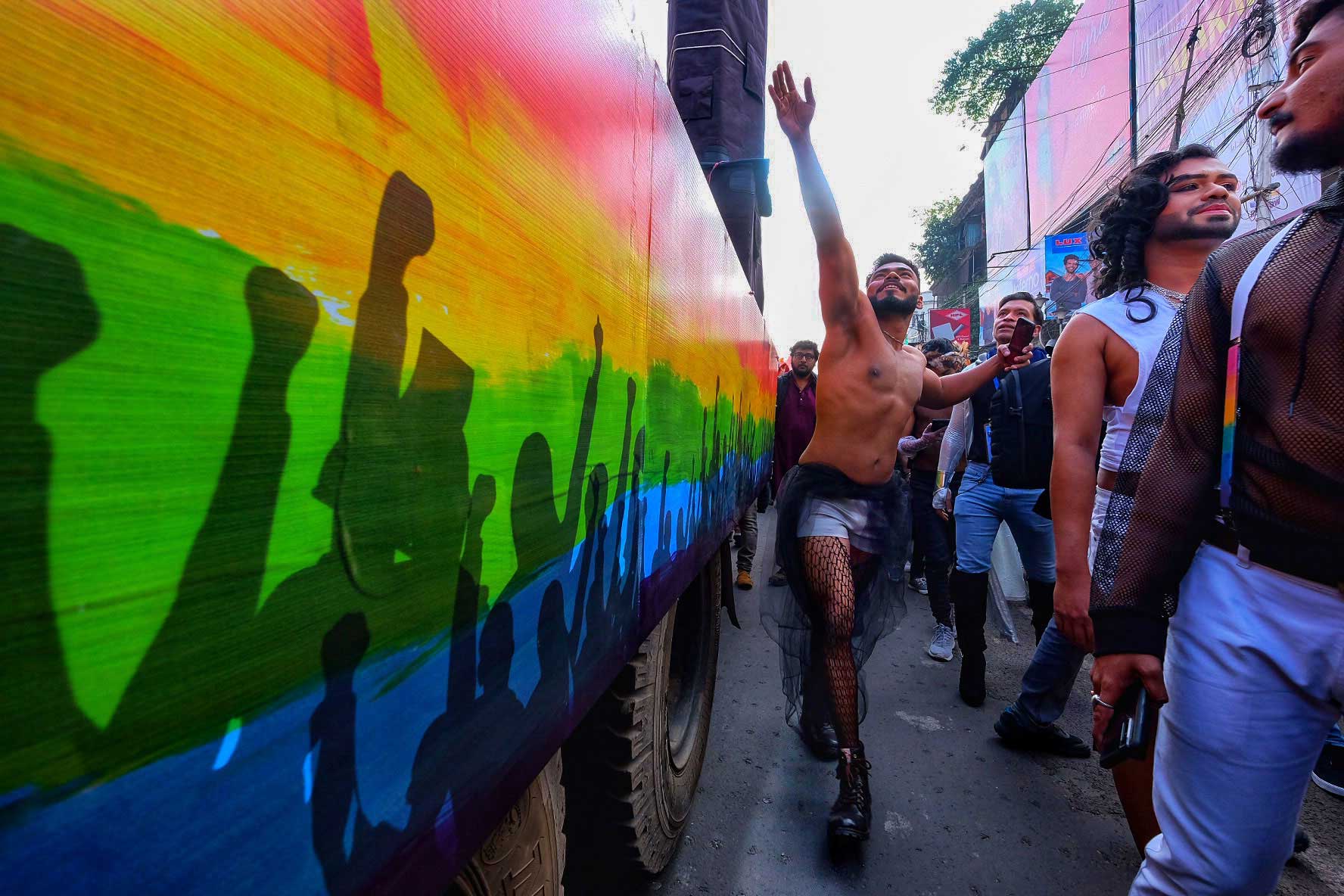 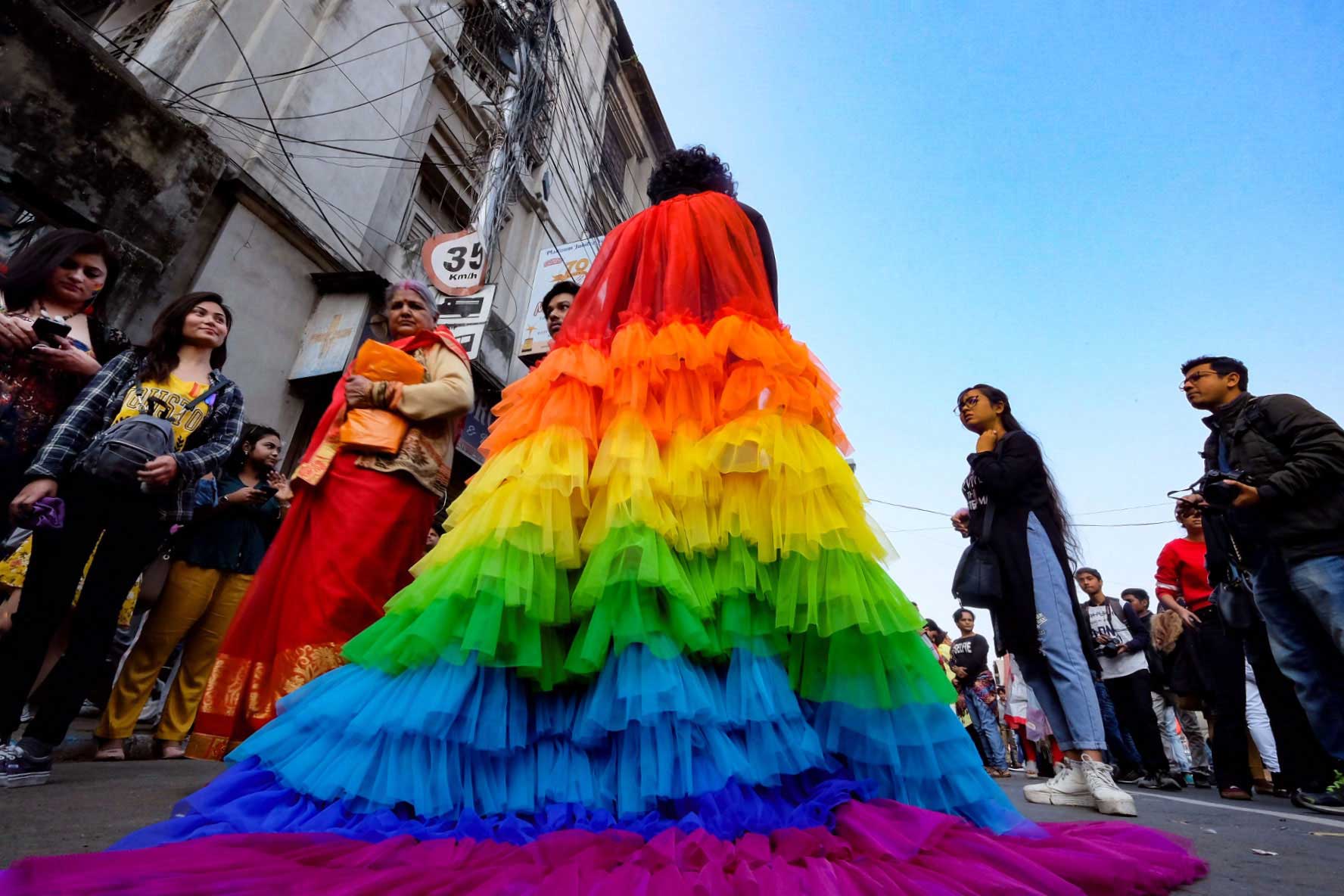 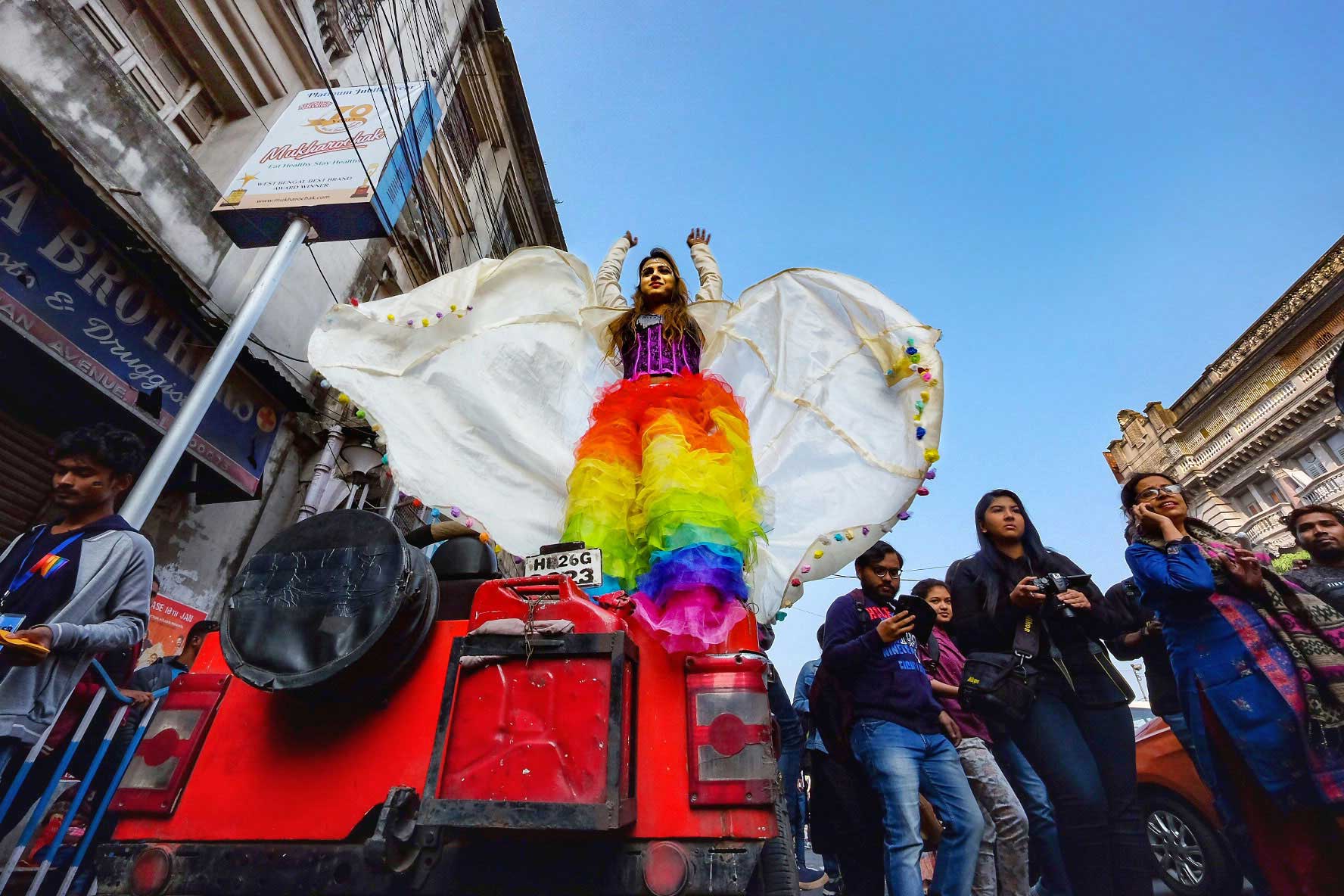 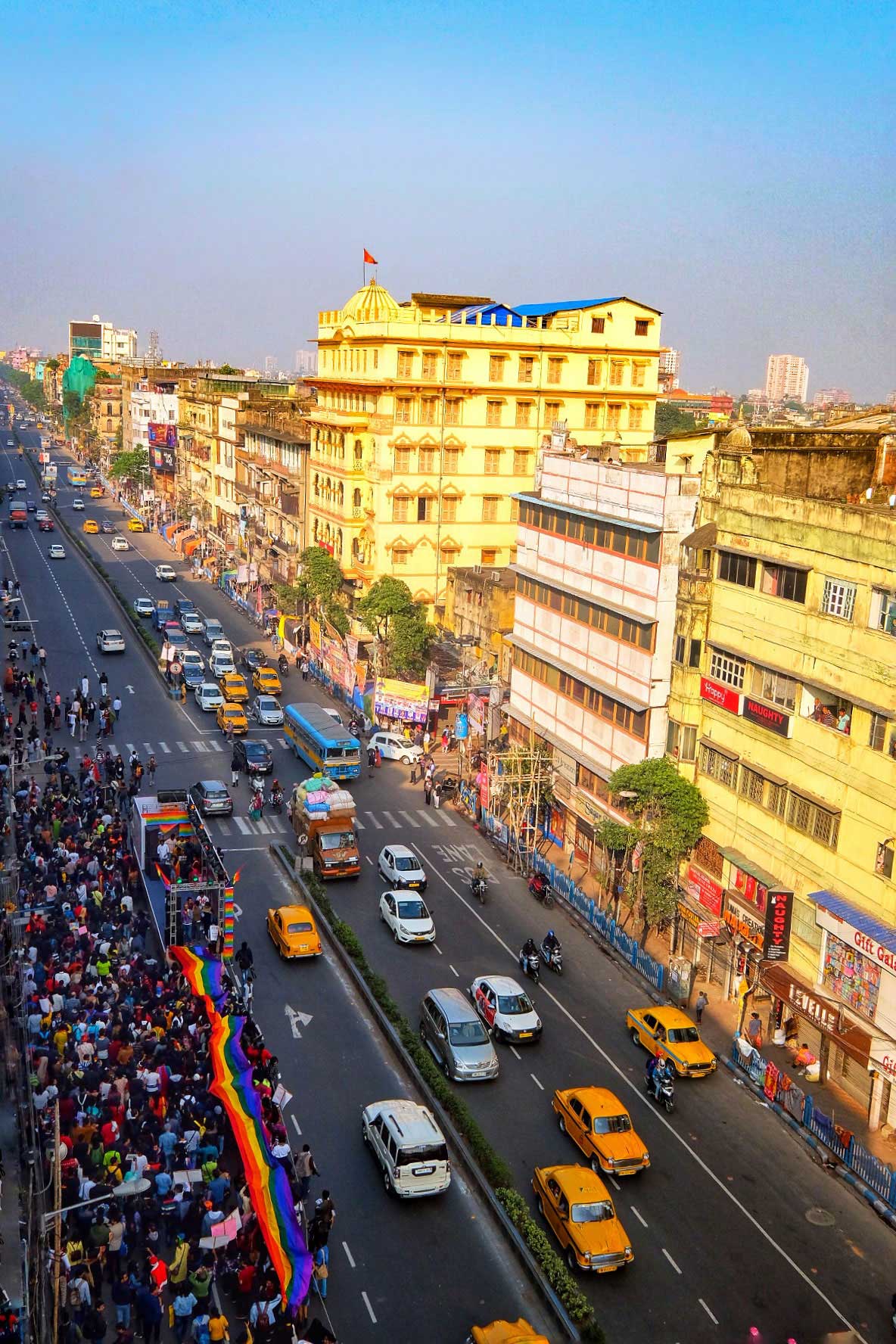 My name is Ritesh Ghosh and I am a Travel and Street Photographer from Kolkata. This would probably not have been my introduction 8 years ago when I was just a regular guy working in a Private Bank. Although I had been creatively inclined since childhood, the 9 to 5 grind left me with almost no time to discover the potential within. I guess everything comes with an expiry date and so did my career as a Banker. Looking at the world around me through the little glass window on my camera I started getting intrigued day by day. Persistence and Patience are the best friends of a photographer. I try and shoot regularly for about 3 hours. By virtue of these qualities one starts looking at the things around them with precision. Juxtaposition is my favourite sub genre in Street Photography. It gives me the opportunity to express myself creatively and engage my audience at the same time. I draw my inspiration from Vineet Vohra who has mastered the art of Juxtaposition. Iam presently working on a couple of personal projects and travelling whenever I have the opportunity.