The project is a development of work with my partner Peter in which we perform various incarnations of the couple/family/ wedding portrait. These images were initially inspired by the tradition of the painted wedding portrait in western art history.
974913 min
SUBMIT YOUR WORK
HoursMinutesSeconds

The project is a development of work with my partner Peter in which we perform various incarnations of the couple/family/ wedding portrait.

These images were initially inspired by the tradition of the painted wedding portrait in western art history.

Kings, queens and fairy tales approach the subject of the marriage union in terms of childhood inspiration and fantasy. For instance the fairy tale notion of growing up to marry a prince, combined with points in photographic history (the Cottingly fairies) and historic tragedy (Oscar Wilde’s fairy tales). 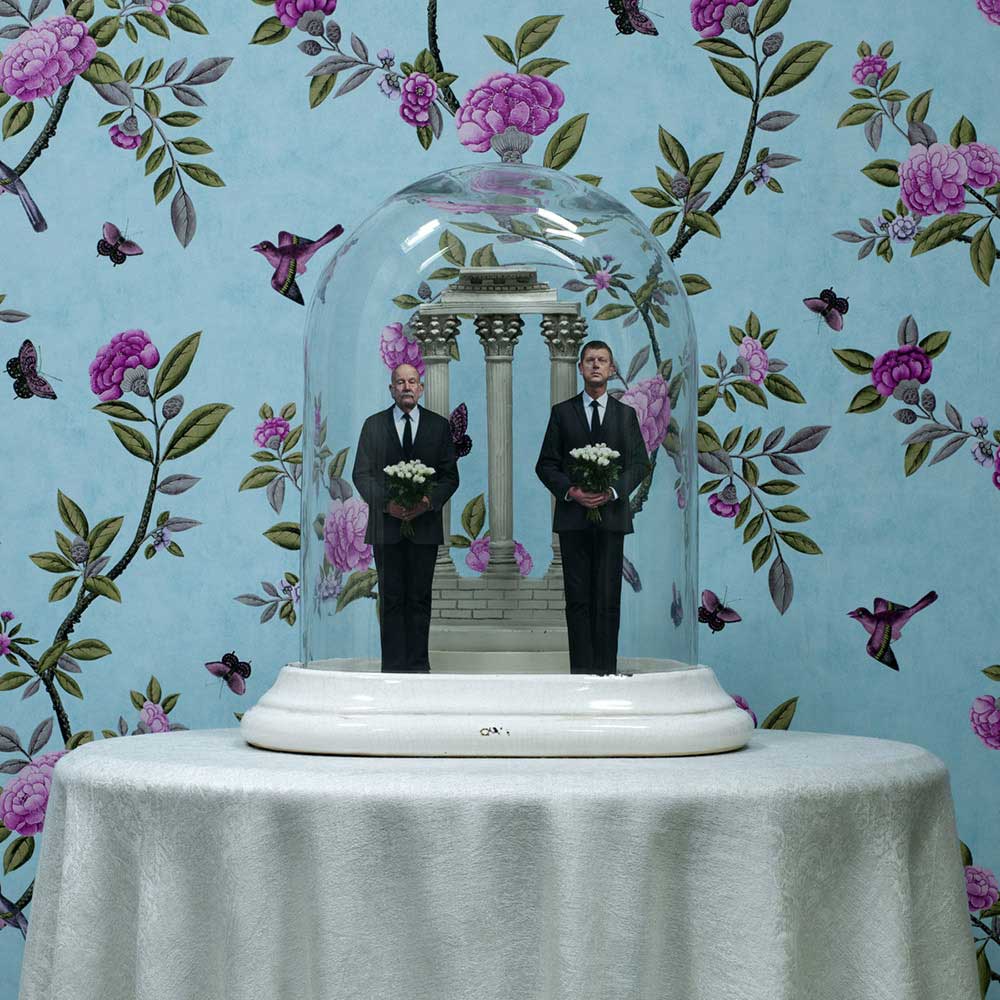 These tableau/still-life/model shots of idealised cottages/houses and churches that play with scale as a metaphor for inspiration, are contrated with a real-life locations that emphasise an almost child-like perspective of what a church or house might look like. In Jan an Eyck’s portrait of Giovanni Arnolfini and Giovanna Cenami (Arnolfini Wedding Portrait 1434) Mario Praz says that “the family group portrait reached its complete definition”. He argues that the emergence of a bourgeois class in northern Europe leads to an interest in representing both the family group and the surroundings of the sitter. The desire to paint the family within an environment or landscape would become what Praz defines as the ‘conversation piece’.

The development of this genre of portrait painting reached a highpoint with Thomas Gainsborough whose portrait of mr & mrs Andrews (1750) depicts the married couple in the landscape which they live and possess. Praz declares the Gainsborough painting is “a perfect mirror of eighteenth century English society”.

The ability to represent one’s family in the eighteenth century depended on the wealth of the subject/sitter to employ a portrait painter. The emergence of photography in the nineteenth century led to a greater democracy of representation, but still the lower and working classes had little autonomy over the representation of their loved ones. In working with miniature effigies, montage cut-out figures and the real-life representation of my partner Peter and myself, I make various model and tableau scenes which explore idealised surroundings in terms of scale and decor in order to evoke an almost child-like promise of what a grown up world might offer.

In response to the conversation piece in the landscape I explore the possibilities of expressing the wealth of surroundings by creating miniature worlds where cut-out effigy figures pose amongst the flora. It is important that these figures are montage, (I am physically inserting our presence into a ‘real’ scene). The condition of the inserted figures ‘being there’ while ‘not really being there’ corresponds to a state of uncanny, which Praz observes in the Arnolfini portrait… “The presence of the Arnolfini married couple fascinates us and at the same time produces a vague uneasiness, as when we are facing uncannily lifelike wax figures, because their immobility is like that of the things which surround them”.

The allusion to the Cottingly fairies of a gay couple rummaging around in the undergrowth is one that is fused with double intendre, which is reaffirmed by the title of the works. The terms used in titling the pictures (cottage, fairy, queen) are chosen because they have an obvious double meaning and transgress the stereotype of what a same sex union might represent, while also playing with myths and fairy tales of idealised unions between princes and princesses, houses in the country and cottages in the woods.

Similarly, in a culture where same sex relationships were not acknowledged in law, the representation of same sex couples exist, but are usually hidden or defined in other contexts. With the introduction of gay marriage in law in a number of European countries and some American states, certain western powers are declaring an acceptance of same sex couples.
Often, the photography that depicts these unions adopt the conventions that have evolved photographically around the heterosexual union. In one sense, this might be seen as an act of transgression, taking ownership of the convention and making it one’s own. As a photographic artist, I am interested in exploring alternatives to the wedding genre that perhaps have their roots in the historic convention of the ‘conversation piece’. In Parentheses by Philip LePage