The presence of signs is the revelation of the trace of men in the American landscape, and, of the endless expansion of urbanism with the sensation that there is no going back.

Emmanuel Monzon is a photographer and visual artist based in Seattle, WA. He graduated from the Academy of Beaux-Arts in Paris, France with honors.

His work has been featured throughout the US, Europe and Asia (through exhibitions, selections and various awards). Through his work, he explores and questions the signs of urban sprawl in our visual field. His photographic process is being influenced by his background as a plastic artist. Emmanuel Monzon was published in our print edition #10. [Official Website] [Print Edition][Digital Edition] 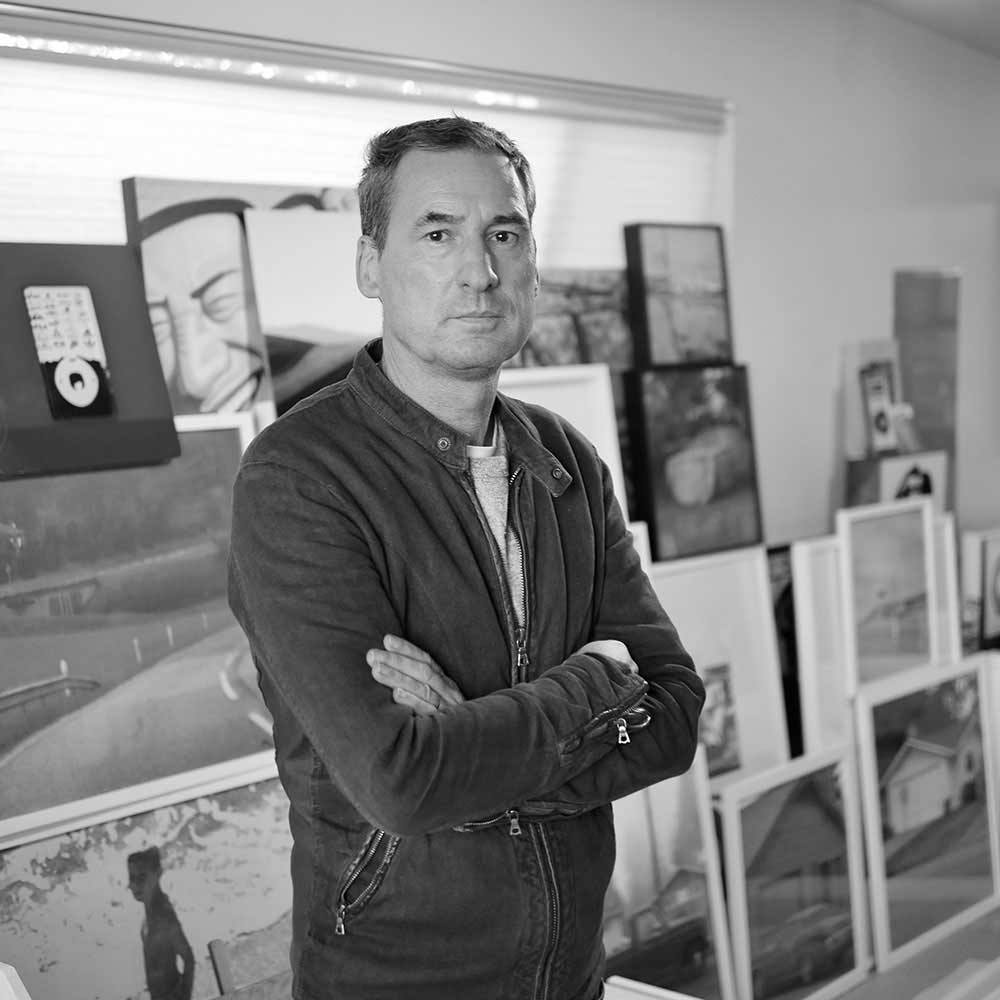 I’d like to begin by discussing your urban sprawls, your images seem to deal with a lot of specific compositions, with one or more objects being the focal point that ties an image together. However, many of your photographs highlight particular colours. Are you interested in highlighting how colour plays an important part in its relationship with the rest of the landscape, and if so why?

In practice, I always see myself as a painter who uses the tool of photography as a transitional passage. I’m in the in-between, I’m a photographer who paints or a painter who uses photography. Indeed, the use of pastel colours play a very important role for me. It appeases me statement because I like having human signs or traces that are not properly aesthetically pleasing, that is why I also smooth the colors, to make it more poetic, or less harsh. I am not interested to reconstitute a harsh reality, and as I said before, I have my painter instinct, and I need to put a distance between the medium of photography and painting. As a result, it creates a world specific to me, and I like to travel within this world that I have created.

Paradoxically, I like to work on the theme of the landscape in a square format, because this framing guides and defines my line of work, it is a choice of voluntary restriction, which obliges me not to return entirely in the codes of the photograph, and limits my field of action in a deliberate way. It allows me to focus on the subject, to put it at a distance, to create a soft tension. Symbolically I find that the square format sends back an image of stability, solidity, and neutrality, it wants to be objective. This format forces me to make choices, to be more rigorous. In a way, it creates boundaries to my field of action. The square symbolizes the stop, or moment taken, an idea of stagnation of solidification. It is the perfect balance, and imposes its structure on my images, and puts order in my composition. 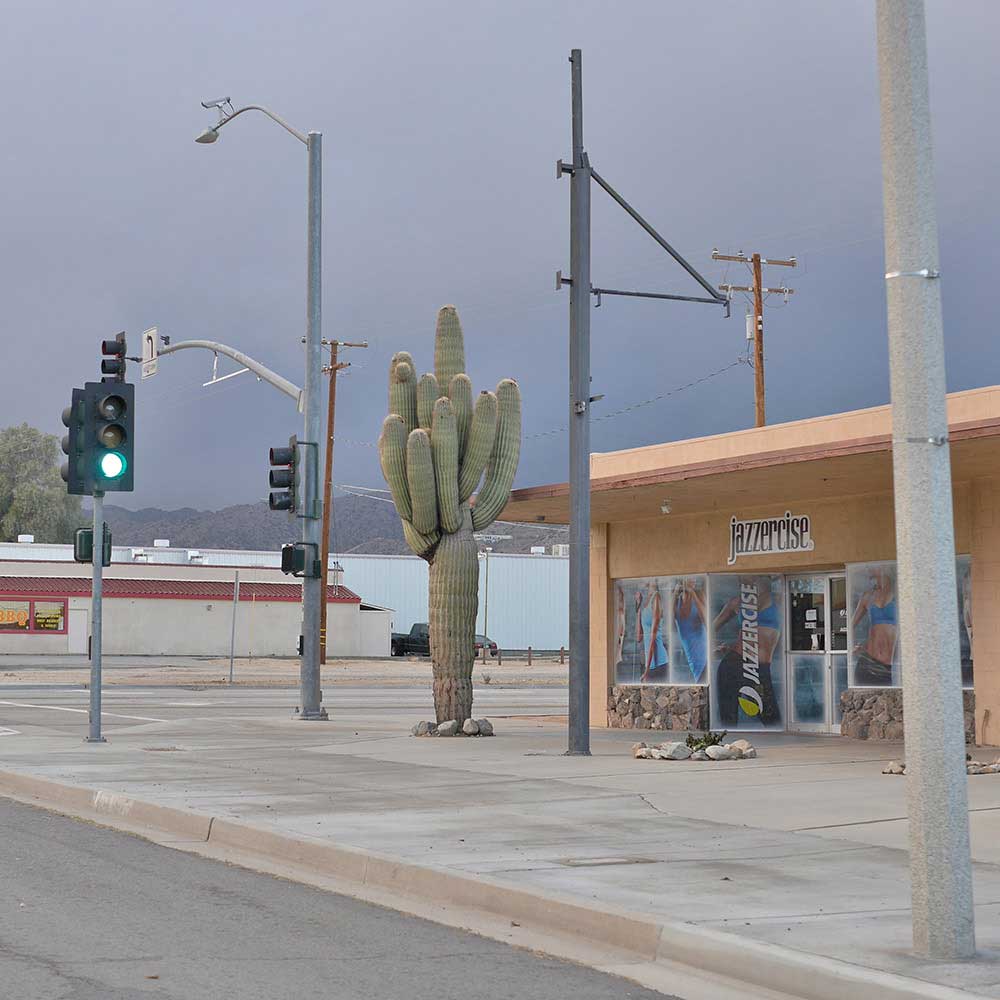 One photograph which immediately drew my attention is the image of the orange light in the doorway. Everything outside this doorway is grey and neutral. However, this particular image seems to be shrouded in mystery and subtlety. Can you tell us a little bit about how you came to shoot this image and its location?

Yes, indeed, it is a photo that I personally love. When I saw the location, it directly caught my eye. This place is located in a back lane in Seattle. The orange light was strangely bright because the protection of the bulb was broken. I understood that there was a photo that should be taken, and that photo could tell a story. This bright light is an invitation to this enthralling place, and as you said, the doorway was shrouded in mystery and the photo begged for the discovery of this doorway. There is a sensation of tension that is created with the framing, and it invites the viewer to tell their own story of this photo.

I’d like to discuss the colour pallet of your images, as previously stated many of your images focus on a particular colour. However, your body of work seems to emphasize this minimal and almost subtle way of focusing on the landscape which you are photographing. Are the colours present in your images determined by the use of a film camera?

Indeed, I have a few parameters of my own with my camera, but I do not use film. In studio, I rework the photos by desaturation them, but I do not use any software like Photoshop or Lightroom. I want my images to be as natural as possible. I do not want to lose myself in the many artificial tools that are now permitted by the new technology. 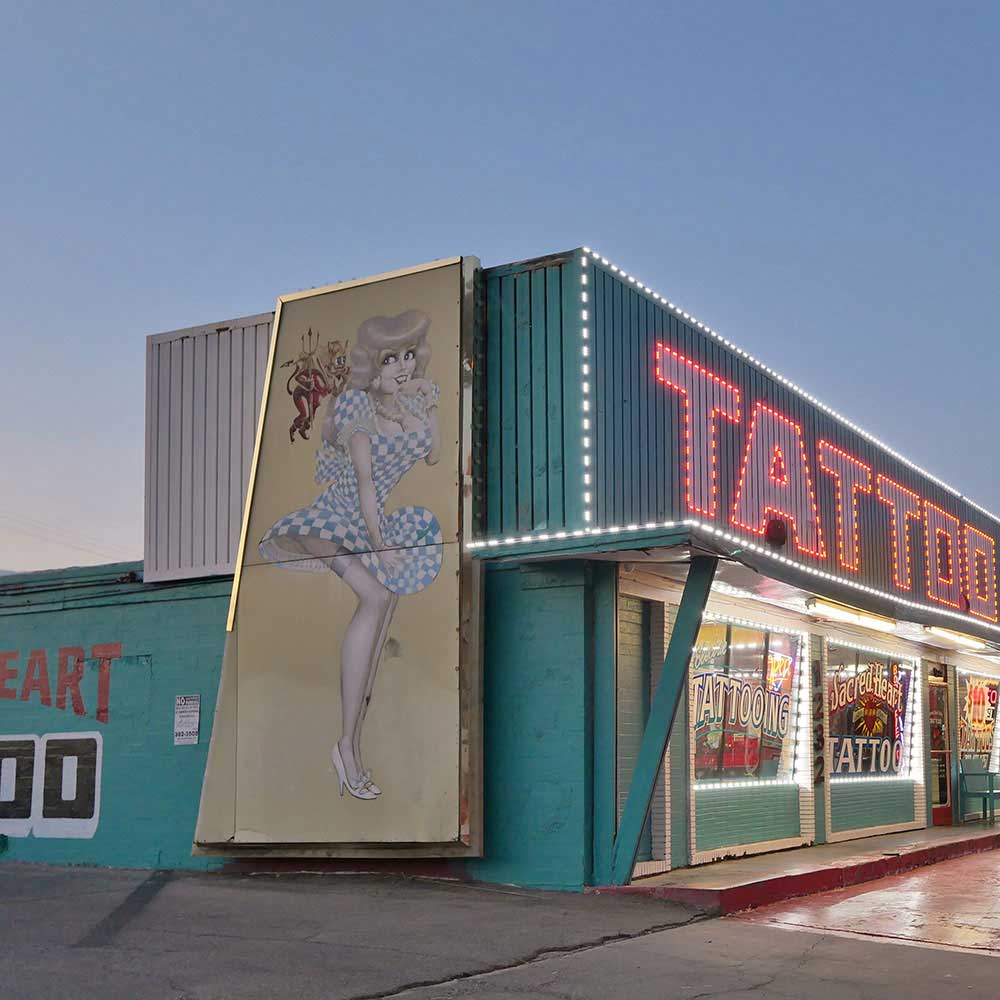 One artist which comes to mind when I look at your photographic work is James Turrell and his use of light. Are you inspired by artists like Turrell when you look for objects to photograph, (specifically in regard to your after dark images)?

Indeed, I really like the work of James Turrel, in its control and domestication of light. In paradox, in my work, the role of light is important, but in a particular manner: by a form of non-presence that could be revealed like a toneless colour. Just for information, I am much more close to American painters like Edward Hopper or the impressionist movement. 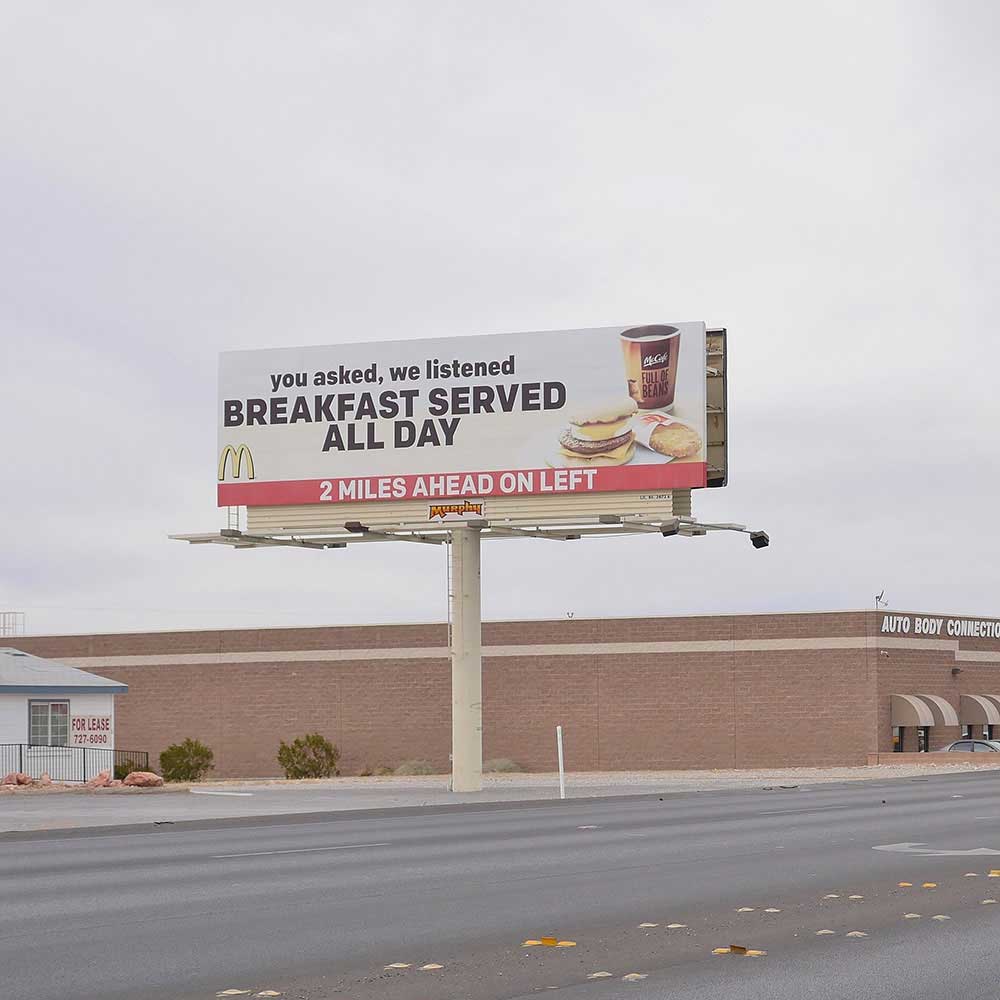 The desolate landscape is something which seems to be apparent throughout your investigation of “emptiness”. What attracts you to American landscapes which deal with isolation?

First of all, concerning the generic title “Urban Sprawl Emptiness” was imposed by the seriality and the repetition of my subjects of predilections: the deserts of the American West and their poetic and chaotic processions of motorway interchanges, the cities without centers, the residential zones without inhabitants. I have the feeling that the extension, the identical and omnipresent reproduction of the trace of the humans on this territory, ultimately shrinks the world.

I believe that the expansion of the urban or industrial landscape in the American natural landscape has redefined this space and has become itself a “non-place.” The transition from one site to the next: You have arrived and at the same time you have never left.

I really love this question! Because indeed, one doesn’t go without the other. The presence of signs is the revelation of the trace of men in the American landscape, and, of the endless expansion of urbanism with the sensation that there is no going back. I do not see it as a denunciation, but as a revelation more ironic and poetic of our world. I am trying to find in it a form of gentleness for a vision more poetic, which maybe makes it my signature! 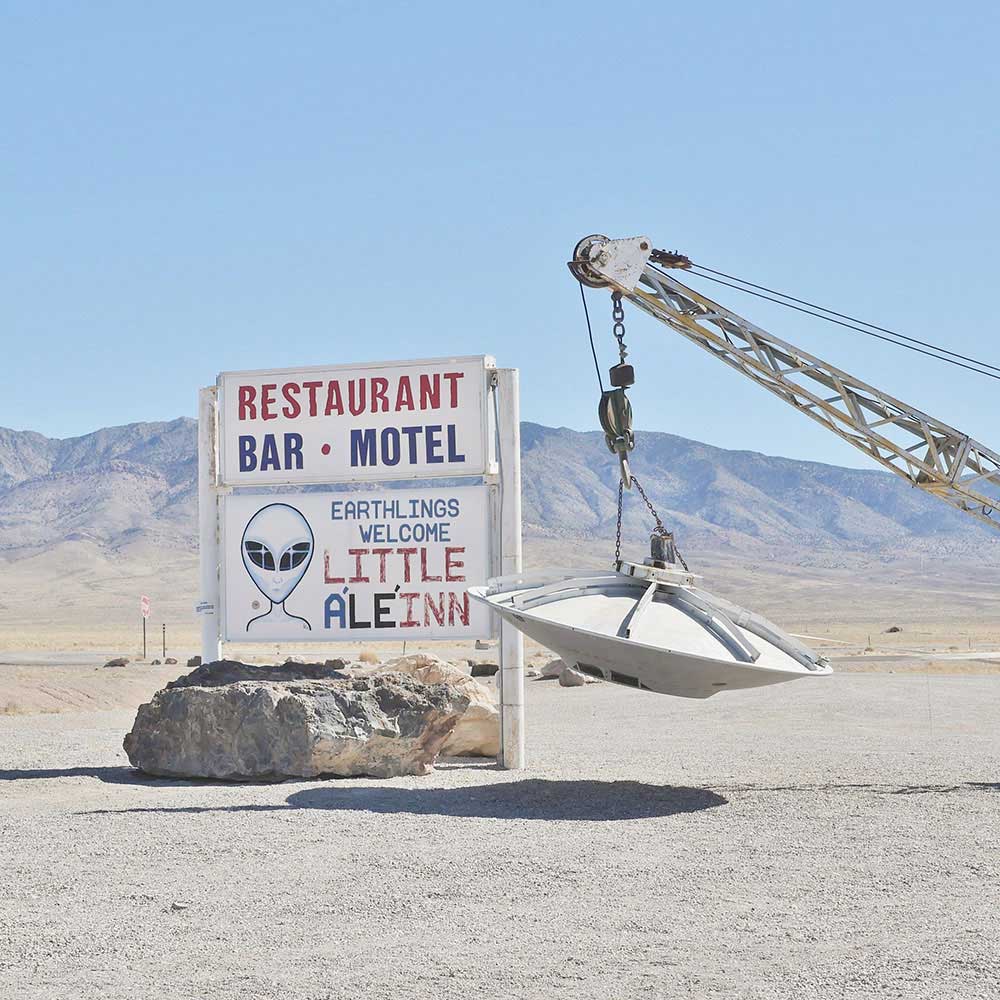 A recent MA graduate from the University of Lincoln, Francesco has now focused on landscape photography as the basis of his photographic platform. An author for DODHO magazine, Francesco’s interest in documentary photography has turned to writing and has had various articles, interviews and book reviews published on platforms such as: ‘All About Photo.com’, ‘Float Magazine’ and ‘Life Framer Magazine’. Currently on a photographic internship, Francesco has most recently been involved in the making of a short film titled: ‘No One Else’, directed by Pedro Sanchez Román and produced my Martin Nuza.

Dorothea Lange’s Migrant Mother: A legend of the great depression