Easton Nights is a story about small town America as told by Peter Ydeen’s night photography. The Lehigh Valley, where Easton lies, has close to a million people but almost no real downtown; but instead a sea of small towns which have grown together. It has its own personality, serving as a living museum of small town Americana.
7103 min

Easton Nights is a story about small town America as told by Peter Ydeen’s night photography. The Lehigh Valley, where Easton lies, has close to a million people but almost no real downtown; but instead a sea of small towns which have grown together. It has its own personality, serving as a living museum of small town Americana.

Peter Ydeen is primarily an Urban Landscape photographer currently living in Easton Pennsylvania and often traveling abroad. He works within the now established tenet of Urban Landscape Photography, which celebrates the complexity and beauty of the mundane world. As the work progresses it has been taking on a more romantic quality, which uses the typical and ordinary as an impetus, but then adapting more ethereal qualities. His work looks for inspiration in the poetics of George Tice, the playful lyricism of Paul Klee, the eccentric energy or Charles Burchfield, all trying to set themselves within the romantic setting of an E.T.A. Hoffman tale. The thrust of his work has been a night series “Easton Nights” however in the last few years he has also completed a smaller series, “Waiting for Palms” shot in Egypt and Morroco, and “Valley Days”, a series of daylight shots in the Lehigh Valley, and “Valley Days Rondels”, a subset of Valley Days done in a round format. 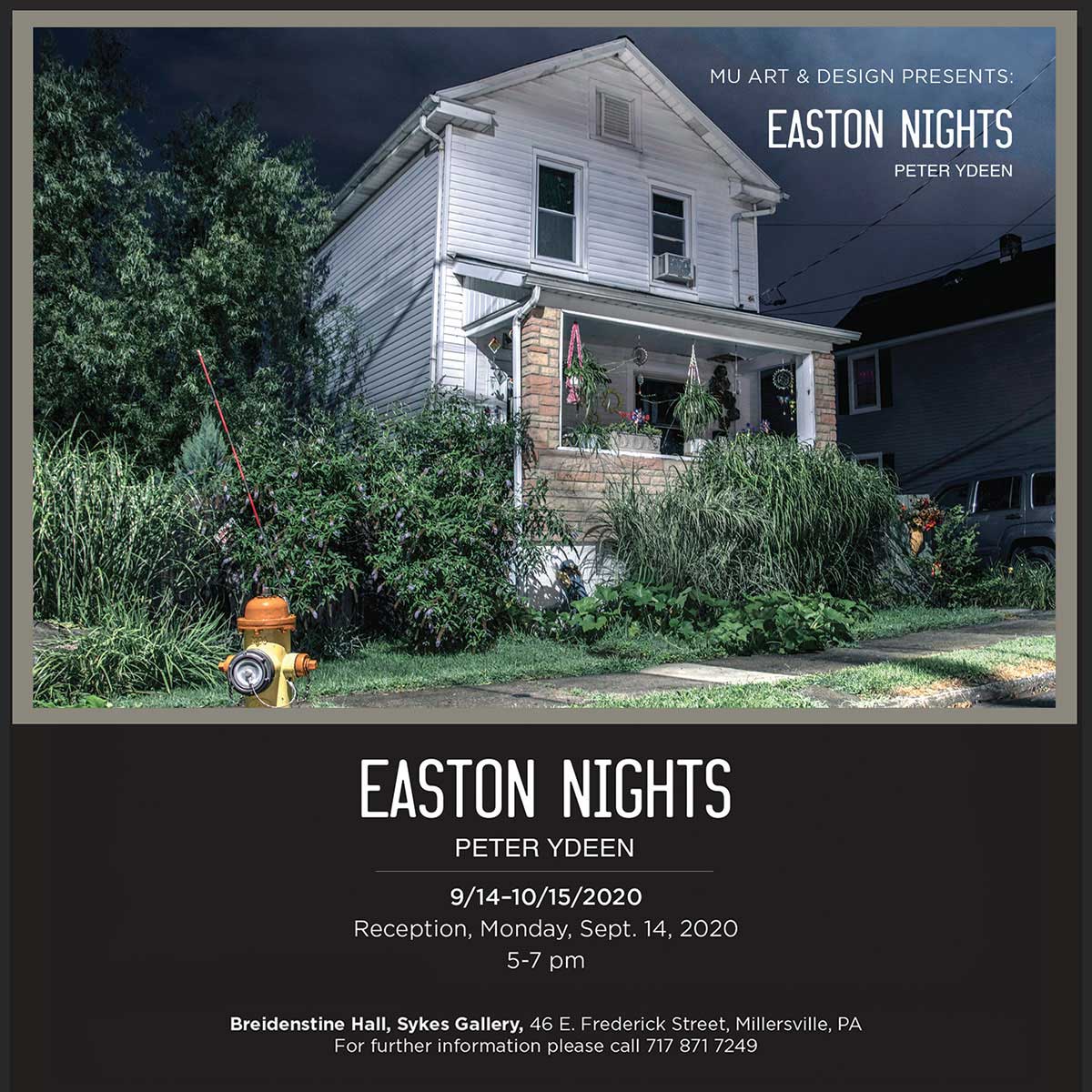 Since the close of 2015 Peter Ydeen has been photographing at night in the Easton Pennsylvania area.  Starting with images of George Tice’s elegant night shots in mind, it soon matured into much more than he had expected.  The night has it’s own visual rules, it’s own color wheel, and it’s own ethereal presence.  City lighting is meant to light up objects in much the same way you would light a still life or a stage set.  Coupled with the pink light emitted by the odd sodium vapor street lights, Easton becomes a silent city of lit stages, all in unreal color and shadow. Every space acts as a reflection of the people who made it.  An  empty geometry, with its decades of formation, creates an unusual living lyricism; emphasized with paint stroke like diffractions, animated distortions and the occasional painted words which connect to the moment in our time.  The project is both addictive and cathartic, and what started as an exercise, became an interaction with the quiet shapes and exotic lights in this sometimes forgotten city.

Since the close of 2015, urban landscape photographer Peter Ydeen has been shooting Easton, Pa., and the surrounding area at night. These efforts evolved into a monumental series, capturing the ethereal beauty and unreal colors of a classic Americana town, transformed under cover of darkness. Ydeen received his B.F.A. from Virginia Tech and M.F.A. from Brooklyn College.

What photographers listen to