In this edition, we have the honour of publishing the photographers' works, Alain Schroeder, Francis Meslet, Gillian Hyland, Garth Lenz and Steve Geer, Without a doubt, some of them, ambitious projects and with a marked personal stamp.
235112 min
SUBMIT YOUR WORK
HoursMinutesSeconds

Without almost realising it, we are already going through the number 8 of Dodho Magazine, during this journey we have promoted more than 50 incredible photographers. 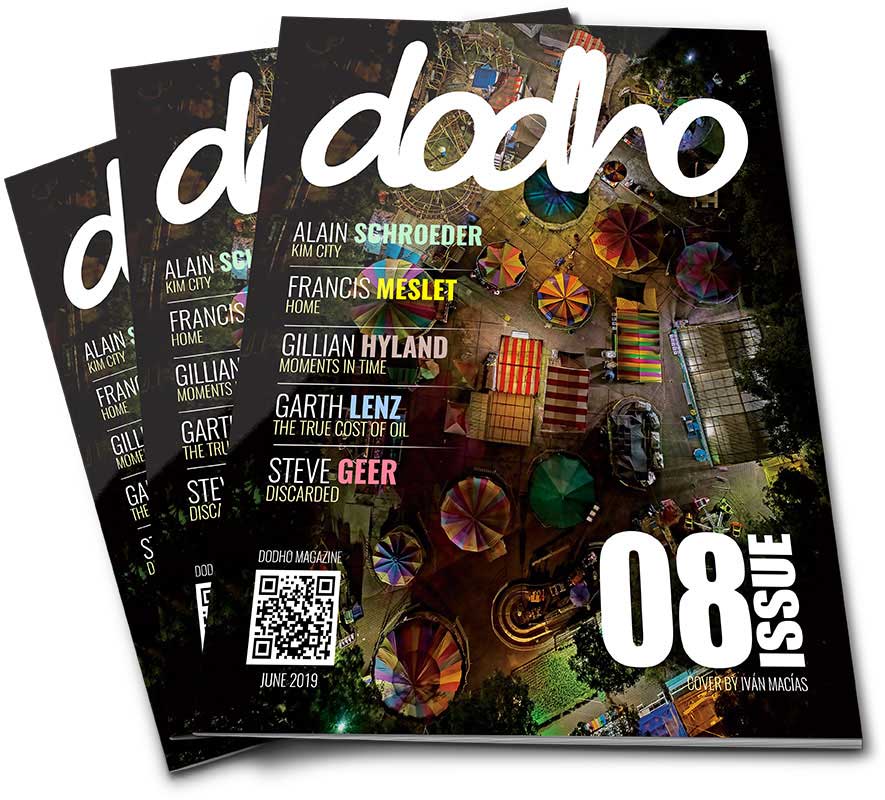 In this edition, we have the honour of publishing the photographers’ works, Alain Schroeder, Francis Meslet, Gillian Hyland, Garth Lenz and Steve Geer, Without a doubt, some of them, ambitious projects and with a marked personal stamp. As in each edition, we will present the six selected photographers by our professional and committed jury, to the best galleries, festivals and professionals in the photographic industry.

Photographers published in this edition Iván Macías | Cover | With camera in hand I began to learn in a completely self-taught way all the technical aspects, gene- rating content in constant evolu- tion and with great variety, a year later I started to make collabora- tions for magazines like Time Out México, which allowed me to con- tinue expanding my knowledge. After that I started experimenting with different types of photography such as landscape, urban, portrait and drone. All this has helped me to have a better understanding of the art and is heling my to generate my own style. Alain Schroeder | Kim City | Alain Schroeder is a Belgian photojournalist born in 1955. In 1989 he founded Reporters, a well-known photo agency in Belgium. He has illustrated over thirty books dedicated to China, Iran, the Renaissance, Ancient Rome, the Gardens of Europe, Thailand, Tuscany, Crete, Vietnam, Budapest, Venice, the Abbeys of Europe, Natural Sites of Europe, etc.  Belgian book titles include, «Le Carnaval de Binche vu par 30 Photographes», and «Processions de Foi, Les Marches de l’Entre-Sambre-et-Meuse».  Publications include National Geographic, Geo, Paris Match,… He has won many international awards including a Nikon Japan award for the Who Will Save the Rohingya series, the TPOTY (Travel Photographer of the Year) award with two series – Living for Death and Kushti, a World Press Photo 1st Prize Sport Stories for the series Kid Jockeys Francis Meslet| Home | A graduate in Design from the Fine Art School of Nancy in 1986, early in his career Francis Meslet was a designer, but soon turned to advertising when he joined several agencies as an artistic director. After 30 years spent questioning the creative concept and studying images in all his compositions, he is now a creative director. Francis does not hesitate to roam the world in his spare time, searching for abandoned sites, sanctuaries where time seems to have stopped after humans have evacuated them. He thus brings back captivating and melancholic images of his travels to the other side of the world… Like time capsules, testifying to a parallel world and perfect for enabling the mind to wander and ponder, Francis Meslet’s melancholic images brave the passage of time, making way for silence after the memories left behind by human inhabitation. Gillian Hyland | Moments in time | Gillian Hyland is an image maker; she personally composes every aspect of her pictures. Originally from Ireland Gillian’s career began in publishing, where she worked as a fashion stylist and features writer for a number of well-known national magazines. This led to a move into the TV and later the film industry, where she worked in a variety of role including stylist, set designer & art director. Since 2007 Gillian has been living in London. Since 2007 Gillian has been living in London. This period has seen her create imagery for fashion shoots, commercials & advertising campaig- ns for a range of high-profile clients & brands. This diverse background helped her develop a passion for ma- king images which evolved into her own distinctive photographic style. Her photographs have been exhibited around the world & received several awards Garth Lenz | The true cost of oil | Garth Lenz is an editorial and fine art photographer based on the west coast of Canada. Though originally trained as a classical pianist, Lenz turned to his other lifelong passion, photography, shortly after completing his bachelor’s degree in Piano Performance. While global deforestation and the world’s old growth forests were major focuses in Lenz’s early work, in recent years, much of Lenz’s photography has centered around the world of fossil fuel production, climate change, and their associated impacts on the natural environment. Throughout his entire career, the contrast between the industrial and the natural landscape has remained a central theme in Lenz’s work. Lenz often photographs from the air as a means to communicate the unprecedented scale of industrialism ́s environmental impact as well as to document remaining areas of large intact ecosystems. Steve Geer | Discarded | I grew up, tall and skinny, in England, absorbed by the two passions of my youth, photography and natural science. These pursuits have something in common – they both require imagination.  At University I studied physics and became a scientist. For a time photography took a back seat. It was the thing I did on vacation. After working as a research scientist for a few years in Switzerland, I transplanted myself to the United States and ended up in Chicago. Then came the digital revolution and I began selling my images as stock photographs. This was exciting but as time went on I became less interested in producing images that sold by the hundreds and much more interested in the type of photography that sold in limited editions and provided a creative outlet for my imagination.