The image is taken from a larger series titled Scotland and the Environment, touching on a variety of contemporary issues facing Scotland today, such as plastic pollution, marine conservation, intensive agriculture and woodland protection.
99710 min
SUBMIT YOUR WORK
HoursMinutesSeconds

Gavin is a Scottish freelance photographer and digital assistant working throughout the UK and beyond. He originally trained as a classical and jazz musician at London’s Guildhall School of Music, before moving to Paris as an artisan baker, working with leading French boulangerie Eric Kayser. His photographic work is as diverse as his background, bringing together many creative elements in his work. He draws particular inspiration from the art, design and photography that he was exposed to during his time in Paris.

Working with people from all walks of life, Gavin enjoys capturing unique stories with authenticity, sensitivity and creative flair. Comfortable working in many different photographic situations, his work covers many different genres from commercial and advertising, lifestyle and portraiture, with a particular love of arts, theatre and musical promotion. The highlights of his professional work include an ongoing six month commission for the Royal Opera House and the Royal Ballet in London’s Covent Garden.

The image is taken from a larger series titled Scotland and the Environment, touching on a variety of contemporary issues facing Scotland today, such as plastic pollution, marine conservation, intensive agriculture and woodland protection. The idea behind this particular shot was to feature the portrait of an iconic marine mammal such as the common seal, native to Scottish waters, contrasted with the devastating effects of plastic waste in our oceans.

Because of its cute appearance, deeply melancholic eyes and almost feline face, we have a natural affinity towards this graceful animal. This is starkly contrasted with simulated plastic pollution, arranged like a fallen wreath or halo in such a way as to almost choke the animal. 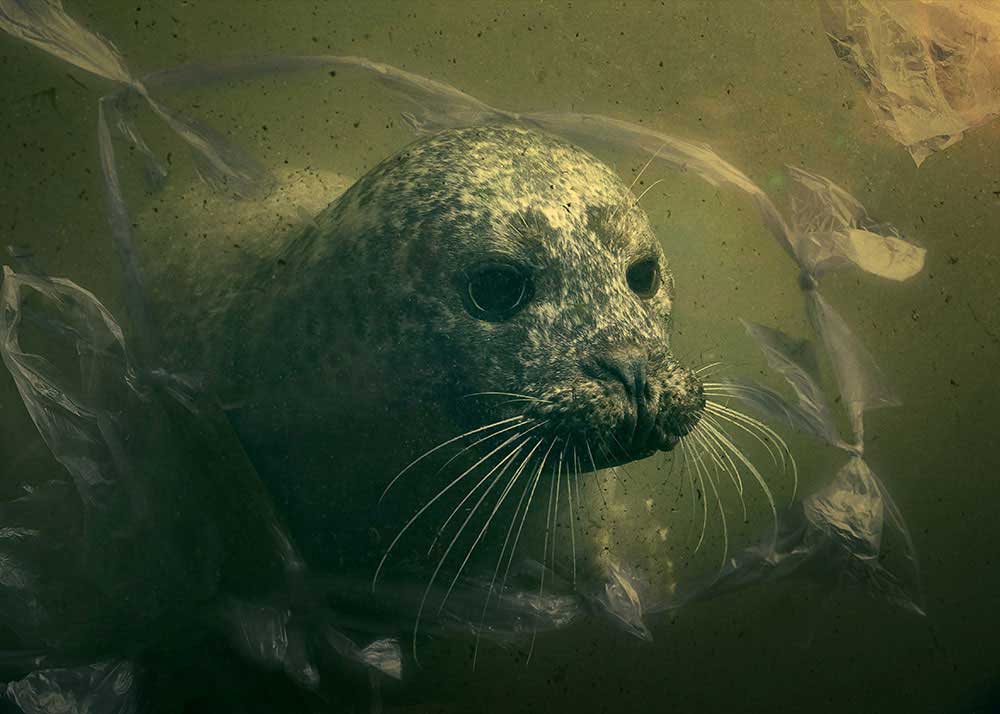 Can you explain to us what equipment you used for its realisation?

Captured in a marine conservation centre in the north of Scotland, the portrait of the seal underwater was taken using a Nikon D750 and a 20mm wide angle lens, to bring the subject closer to the camera and help with the image sharpness in murky water. The portrait was taken in a large outdoor pond, which was lit with the help of two Profoto B1X portable strobes, recreating the effects of sunlight shining into the depths of the water from above.

The additional plastic was captured in the studio using a green paper backdrop and a single Profoto strobe, using a large 65” white softlight umbrella with diffusion, carefully positioned to recreate the same quality of light as in the original portrait.

Tell us how it is taken from the most technical aspect?

The image was taken in two stages as mentioned above: the portrait of the seal was captured in a marine conservation centre where the animal was staying, with the second image captured in the studio.

The most important technical issue was to carefully plan the second studio lighting setup so that it would match the original image as closely as possible. Direction and quality of light were carefully controlled, as well as composition, perspective, lens choice and capture settings such as ISO, which were maintained almost identically between the two shoots. This meant that when the final images were combined in post-production, they would blend as seamlessly as possible.

The biggest challenge behind shooting this image was to get enough sharpness in the main animal subject. The water was incredibly dark and murky, plus the animal was continually moving around in excitement!

In underwater photography, there is a very distinct drop-off of sharpness when shooting through dirty or cloudy water. Many people therefore use wide angle or fisheye lenses to bring the subjects very close to the lens of the camera, reducing the distance of water that they have to shoot through. Profoto lighting was also very useful here, as the quick flash duration really helped to freeze action and lower the ISO values to an acceptable level.

We are talking about the post-production process. How did you get the final result?

Both images were shot using a tethered workflow with capture and RAW conversion done in Capture One Pro. Post-production, compositing and colour grading were achieved in Adobe Photoshop.

The plastic elements of the studio shoot were carefully cut out from the backdrop, with a transparency effect achieved using a selection of Photoshop’s blending modes. This helped them to appear like a seamless part of the original image. The final step was to carefully apply a few passes of colour grading, to give a cinematic and almost painterly effect to the final image, that is somewhere between a movie still and a painted portrait.