I am a very visual person; I have always been. I believe the human form and especially the female form is most fascinating and worth exploring in photography. However, I don`t like to be conventional and I believe that rendering it in a traditional manner in a photo is unsatisfying.

I was born in Oradea on the 9th of April, 1973. I prefer portraits, nu- des, aerial and street photography. I had managed to issue seven illustrated editions of the Bihor County monographs, illustrating the most representative sites in the county. I also issued six editions of the Travel Guide Book of Bihor County.

In 2013 my photographic activity took a turn towards artistic photography and I managed to become a EAAFR (The Association of Roma- nian Artist Photographers) artist and E.FIAP/s artist, managing to obtain 1.040 prizes (285 gold me- dals) in 71 countries. I had several individual photography exhibitions in Oradea, Cluj Napoca, Hajduszoboszlo, Bruxelles, Cernăuţi. From 2016 I started the first authorized Photo School in Oradea with the authority of the Ministry of Work and the Ministry of Edu- cation from Romania. [Print Edition][Digital Edition]

I’d like to begin this interview by discussing the cover photograph of DODHO’s 11th edition magazine. Could you tell us a little bit about how you came to shoot this image, it’s location, the gear you used and if you had to digitally manipulate certain aspects of the image?

That particular photograph is composed of two images. The photographs were taken in Romania, Bihor County, in an area close to where I live, using a Mavic Pro drone. Actually, I took a series of photos in that spot, the first of which was taken during the summer of 2017. That’s when I first noticed the potential of the place, I loved the way that winding road, surrounded by acacia trees, looked from above. So, after seeing the result of that first picture, I made the decision to also take that exact same picture, but during the winter. In order to obtain a beautiful contrast, I had the idea of merging the two images. That is the only digital manipulation I did. The presence of the two cars in the final image was premeditated by me. I had to wait a few minutes in order to have a white car, respectively a red car in the photos. “Dead or Alive”, the photo on the cover of Dodho Magazine is the second version of my idea. The first one, “Weather Snake” is slightly different, but equally as popular. It has also obtained many awards, the most important being Winner in the abstract category of the 1st edition of Drone Awards, organized in Siena. 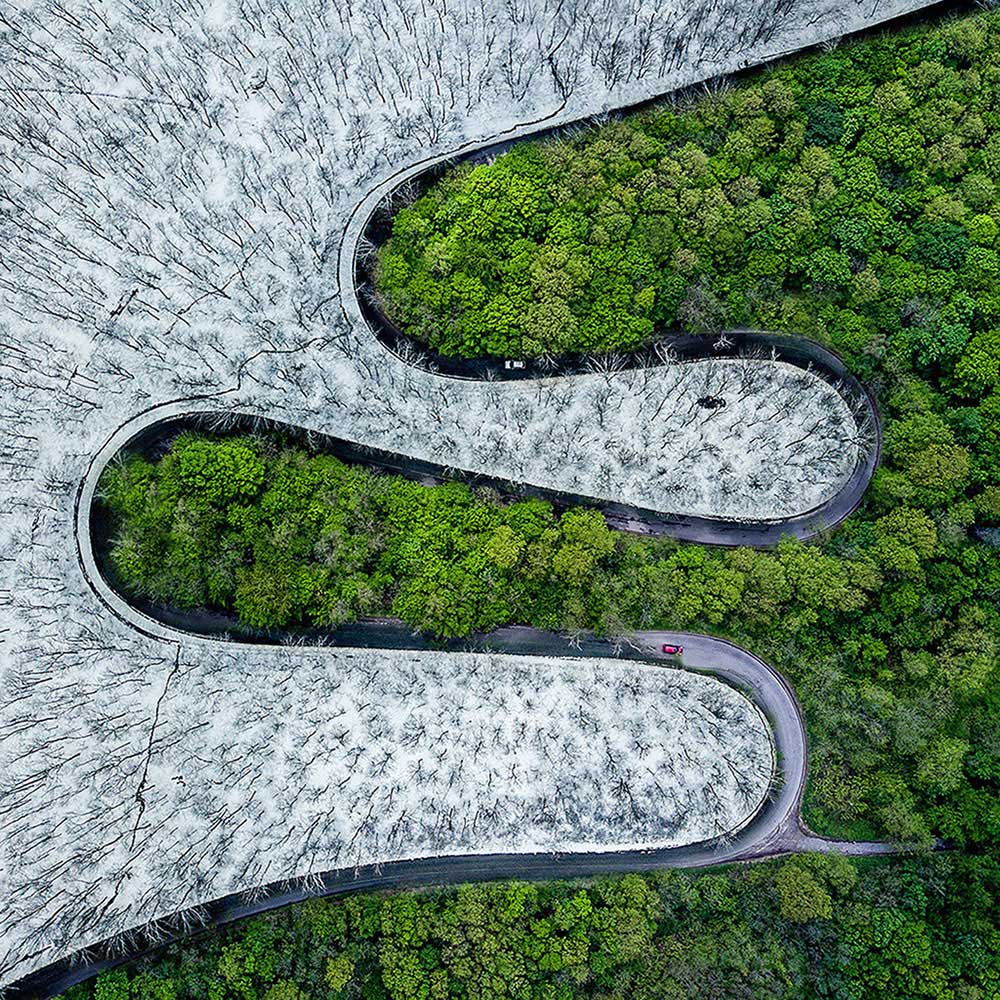 I am a book editor and I have published many books containing pictures of Bihor County, in Romania. Constantly looking for new angles, I decided to rent an airplane in order to take photos from above. This happened towards the end of the 1990`s. I became fascinated with the way my county looked from above and I also got an incredible feedback from all the people who saw these pictures.  After this first experience, I rented a small airplane at least twice every year and I took a lot of aerial photos, trying to cover as much ground as possible. When drones appeared, I bought one as soon as I could afford it.

I am still very fascinated with the bird’s-eye view, and I am constantly experimenting and trying to be original. I have approached many genres in photography, some of them I really liked, but I am particularly fond of aerial photography because it gives me the unique pleasure of showing people an angle that is not easily accessible to them and also because it gives me the chance to combine different genres that I am passionate about, with aerial photography. For example the nude photos I shot from above. Nude photography is also a genre that I previously approached, but in a more conventional manner. I really like it, but I found that aerial photography provides me the opportunity to obtain more creative nude photos. Combining different photographic genres is for me an opportunity to become more and more creative and original and I found that it gives me the artistic freedom I need.

You seem to have a very strong passion for Nude photography. It’s almost as if the majority of your work you produce is an extension of exploring the human form. Could you elaborate on why you are so interested in photographing the human form?

I am a very visual person; I have always been. I believe the human form and especially the female form is most fascinating and worth exploring in photography. However, I don`t like to be conventional and I believe that rendering it in a traditional manner in a photo is unsatisfying. Nude paintings and nude photos have been around for a long time, so it is not easy to be original and to surprise your public as an artist photographer. However, it is a challenge to try to capture the human form in a different way. I like to represent the geometry of the human body and I am not so interested in rendering the model’s emotions. I believe that is a common place in photography and it prevents the viewer from accessing the general because of the particular. In my nude photographs, I want to emphasize the universal in the human form as well as human emotion as a way of reaching every single viewer.

Could you tell us a little bit about your photographic process and planning for an aerial shoot? Are there any particular landscapes that you continuously go back to and explore further?

Everywhere I go, I have my camera as well as my drone with me and many times, during my travels, I just stop the car, raise my drone and take photos. When I see something that sparks my interest on the ground, I always imagine what that looks like from above. Even the first picture, which is now a part of “Dead or Alive” was taken like that. I became aware of the winding road while driving, and I was sure it would look great seen from above. I am a firm believer in spontaneity and inspiration when creating a photo, but that doesn’t stop me from exploring places with the help of Google Maps as well. I do that sometimes and it helps my creative process. There are places I like to revisit because I am curious how they look in a different light or in a different season. One example is “Dead or alive”, but I also have other photos like: “Four Seasons”, which has four versions. That is also a highly awarded photograph, describing a chapel in the middle of an agricultural field. It has many awards not only because I merged 4 to 6 images into that photo, but also because I captured the chapel at an angle, giving it depth and perspective.

Could you tell us a little bit about any upcoming work in landscape or aerial photography that you are currently doing? Or possibly any exhibitions or gallery openings in the future that will showcase your work?

I am currently working on a photo album, containing my nude photography. It is a project that I put a lot of work and passion into and I am very fond of it. I am also working on a new edition of my book, “My Oradea”, which has reached the third edition. I am also planning to exhibit my work in art galleries across the world. So far, I entered many photographic competitions and I won more than 1000 prizes in 71 countries, but I feel that these competitions are somewhat of a close circuit. I want my photographs to reach as many people as possible, people who are passionate about photography and art, not just photographers.

A recent MA graduate from the University of Lincoln, Francesco has now focused on landscape photography as the basis of his photographic platform. An author for DODHO magazine, Francesco’s interest in documentary photography has turned to writing and has had various articles, interviews and book reviews published on platforms such as: ‘All About Photo.com’, ‘Float Magazine’ and ‘Life Framer Magazine’. Currently on a photographic internship, Francesco has most recently been involved in the making of a short film titled: ‘No One Else’, directed by Pedro Sanchez Román and produced my Martin Nuza.