The essay "Life Force: What Love can Save" began because disability is an issue that I have always been interested in addressing, understanding, questioning and deepening. It's something that crosses me personally and I think that's why I feel like a need to go exploring.
189917 min
SUBMIT YOUR WORK
HoursMinutesSeconds

Born in Buenos Aires in the 1980s, Portnoy studied psychology at the University of Buenos Aires, graduating when she was 23. While working with children and older people with disabilities, she became aware of problems stemming from their lack of family connections and the failure of health policies and disability laws.

She found that by taking up photography, she was able to communicate their distress and fight for improvements. Her expertise in the art is self-developed with no formal training. She then became involved in photography as a basis for documentary research, combining psychology with photography. Her series of photographs titled Fuerza de la vida (Life Force) includes Jorge, a victim of thalidomide treatment, together with his wife, Vera, and a five-year-old daughter who both have physical impediments. The couple fell in love eight years ago and decided to get married. In the face of a cold, external climate insensitive to their disabilities, she discovered a more friendly internal atmosphere open to relationships empowering life. [Print Version] [Digital Version] 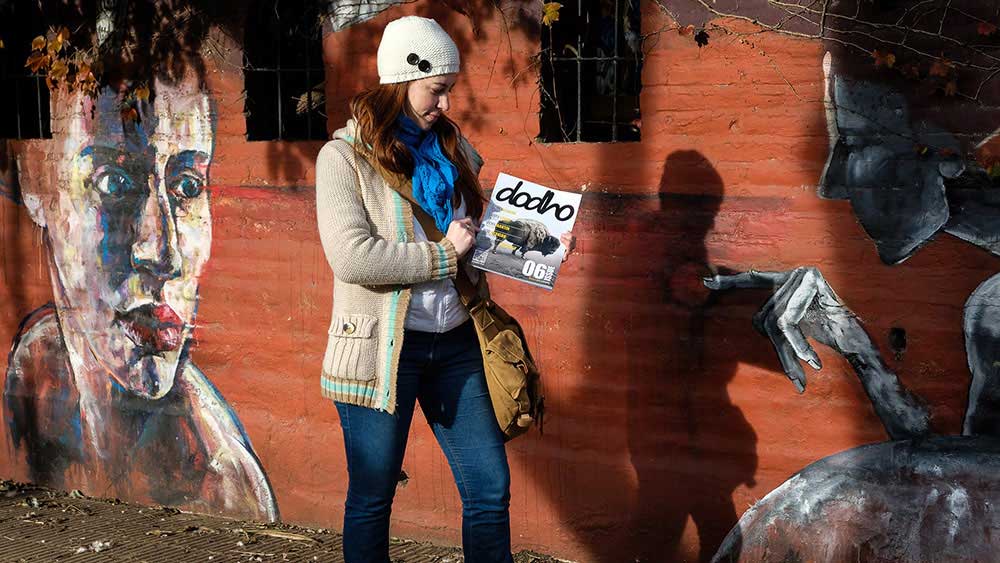 I was born in the 80’s in Buenos Aires, Argentina. During those years, my country went through a horrible military dictatorship. For that reason, I feel that I am part of a generation marked by the permanent search for identity and struggle for human rights.

I currently live in Buenos Aires, about 20 km from the Capital city and work independently as a photographer through documentary research on certain topics that are of my interest. Disability is one of those issues in which I am very interested and this is related to my other profession that is psychology.

At the beginning, I approached photography to incorporate it as an art therapy tool. At that time, I was working with children with diagnoses such as childhood schizophrenia, psychosis and severe autism. They were very serious cases..

From those first moments, there was also a very important change for me, because I began to feel the need to use photography not only as an art therapy tool but also as a possibility to visually communicate popular voices and claims.

In my deep down, I felt the need to explore photojournalism and then I began taking classes, workshops, tutorials, reading material. For several years, I absorbed everything that was within my reach to deepen both the conceptual and the photographic practice and once I felt qualified I began to collaborate with independent and self-managed media. I photographed the struggles and social resistance in the streets of my country along with the different manifestations and demands of the most oppressed sectors.

But I felt that I needed  to guide my practice towards a theme that would allow me to do research deeply, fully, and extensively and there I found the place that finally made me completely passionate: Documentary photography.

What inspired you take your “Life force: What lover can save” project?

The essay “Life Force: What Love can Save” began because disability is an issue that I have always been interested in addressing, understanding, questioning and deepening.

It’s something that crosses me personally and I think that’s why I feel like a need to go exploring.

I have done it for my profession as a psychologist more than 15 years ago and obviously when documentary photography came to my life, I already had a lot of experience and knowledge on that subject. It was like second nature to me. It is not that I woke up on any day and decided to photograph people with disabilities or, that the work of another photographer had inspired me. but rather the opposite.

I did not have to think about what topic I wanted to address, or how I was going to do it, or what I wanted to tell. All that had already been created inside me.

When I met Jorge and his family, all I had to do was tell him my idea so that everything took form and action.

There was a lot of commitment and availability from Jorge and his family, the first approaches took a while because it is not easy to open the doors to a stranger person who wants to portray your privacy and vulnerability. But if one as a photographer, learns to know how to stay, give confidence, know how to wait, have patience and not rush to take pictures, everything starts to flow and the inhibitions of the principle are overcome.

The initial idea of “Life force: What Love can save”, was to tell exclusively the difficulties and the most tragic aspect of disability in Argentina. But as I made progress with Jorge and his family, the second part of the title “What love can Save” began to have such an overwhelming weight that it was impossible not to turn towards that angle. That of tenderness, love, self-esteem, strength, the bonds that can be built day by day, the desire to love and be loved in the face of the total indifference of the so-called “normal” society and an Argentine State that abandons and condemns people with disabilities to exclusion and marginalization.

Before I start photographing, I like to get close to people. Accompany for certain time the life that I intend to capture in the images. Let myself be carried away by that moment, talk thoroughly, understand what goes through their minds and their lifestyles. After that the magic begins to happen and I start to dream with images, with moments that I try to capture through my camera.

Usually the moment of the photographic taking is something spontaneous because I allow myself the time to have a whole previous reflection. And then comes the time to work on the computer with those images, I make some color and contrast corrections and then the edition of the story where the whole puzzle is assembled and with the written development of that story. It is a process that takes time and one must be constant.

In your opinion, what makes a good documentary Photography

I think that a good documentary photograph is one that has the power to communicate and move without depending on subtitles that explain what is happening. On the other hand, the honesty with which the subject is treated is also important. This means that there must be a heart in that project and that means having a great empathy for the cause that we are trying to photograph.

It depends, if we are talking about street photojournalism. The preparation is at the same time that the action, so it is important to gather all the previous information about that event . But, if it is a documentary photograph, I like to investigate the topics, to approach slowly.

That is a difficult question. Obviously have a clear knowledge about the management of the fundamental aspects such as light, composition and content to know how to translate it into the project. But there is also something of that unrepeatable and magical moment that is when everything comes together and moves us. If as photographers we are attentive to that moment that will also be reflected in the image and will be an image that stands out from the rest.

Because my heart starts to beat a lot faster than usual and I feel my eyes jump with emotion. It is something that is simply known and felt at the same time.

The encounter between the symmetry and the precise moment in which that image was captured.

What would find in your Camera Bag?

A pen, a notebook, a recorder, extra batteries, memory cards, some psychology book, my nikon d7100 with the sigma 18-35 mm f1.8, no matter how hard I try I can not get away from that camera with that particular lens and my fuji xt3 with a 23 mm and a 50 mm.

I still have not decided the next step, but it will surely be related to themes that touch me very closely.