What is it about Horror, the macabre, that when it's vague and banal, effects us more than when it's clear? If horror is something that is sensed or felt, how can we manifestly depict or articulate it?

What is it about Horror, the macabre, that when it’s vague and banal, effects us more than when it’s clear? If horror is something that is sensed or felt, how can we manifestly depict or articulate it?

This had been the source of contemplation and challenge for master film makers like Alfred Hitchcock, William Friedkin, and Ridley Scott; but, almost never addressed by photographers, unless it was was war, where the horror in movement, as well as in stasis has been well recorded. How do create a supernatural iteration of horror, which is invariably atmospheric?

This project on horror, sprang to life in my discussion, with my boys, Atman and Raju. We explored the phenomenon on what really constitutes horror. We realized that it’s a three dimensional concept, holographic in nature and manifestation. Horror can be terrifying, only when it’s subtle, inferential, and utterly subtle in its cues and telegraphy. It can be symbolic and symptomatic of something we dread that resides deep within us. Horror is evoked, in surprisingly faint impressionistic, unsuspecting and ambiguous manner of something seemingly unknown, yet feared deeply within ourselves, because we know it, but afraid to admit it.

Fear is contagious, when there is no frame of reference, something beyond our normalcy, like the ability of animals to sense, and then fly to higher ground when a Tsunami had been triggered, which, does not register with humans at all. The unexpected remains unexpected, we cannot, like Lovecraft postulated, correlate: find a connection between animals fleeing to higher ground, and the tsunami. This is baffling, despite our 1.4 kilograms brain! We are utterly sensible to each other, even in the faintest and minutest nuance, yet, we cannot figure to ask why the animals flee to higher ground? One of the most beautifully surreal, yet, terrifying experience, as admitted by Neil Armstrong (Apollo 11 mission astronaut) was the view of earth, suspended in the horrific eternal blackness of deep space, from 40,000 miles in away. It was the humbling realization of how arrogant we remain, despite how fragile and insignificant we really are.

Horror’s lurking characteristic renders it as a phenomenon of the periphery. If something horrifying is in plain sight, your brain analyzes and rationalizes it, and slowly fear is replaced by inquiry. But, a shadow moves behind you, you whirl around and see nothing, you only sense it, you become terrified. By this reaction we know that it’s not clarity that is terrifying, it’s uncertainty and opacity. Horror is vague and inscrutable, it is foggy – something hard to manifest visually, especially, in the medium of photography. We wondered if we could cobble up fog and an undecipherable countenance to derive something uncertain, yet chilling? Could we use some kind of a device that would render everything foggy, just leave us with an impression? – infinite possibilities for our imagination? 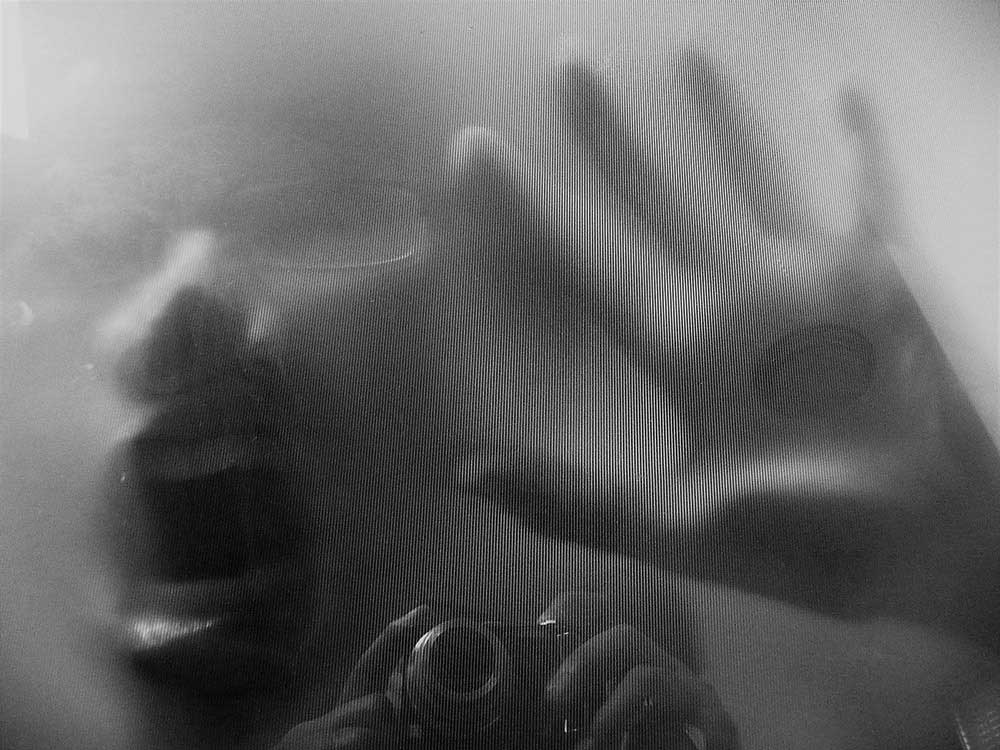 How could we capture the idiom of horror? Then, suddenly, I remembered the sixty inch projection screen I had saved after trashing the TV, which got short circuited during the 2007 basement flood. The screen was actually a composite of 720 lines translucent magnification Lucite sheet, sandwiched between the frosted Plexiglas inside and glass outside facing the viewer. The magnification sheet had this fine concentric pattern with a function to amplify image projected onto it, and at oblique angles we could see the resolution lines distort anything that got close. I took frontal photographs before the screen, a sandwich of three distinct layers of materials, with unsatisfactory results. Something was amiss. There was no formula, we continued with our experiment.

The photographs were very faint palimpsests of information, they constituted the object behind the screen, the objects in the periphery, far deep in the room, as well as the photographer, which result in a vague uncertain montage, from divergent to the convergent. What really was missing was the light behind the screen. And, not till my boys put their faces right up against the screen did I perceive and sense what I was looking for! The distortion of their features was almost supernatural, unearthly. It was an Aha! Moment. Horror, being the oldest human emotion, had remained intact, and had arrived through the fog of eons, unaltered into my boys’ faces! The boys decided to call it “PhoGtography.” It’s an astonishing effect! What I present here are some very challenging experimental photographs – I earnestly hope to elicit some fascination in the viewer, perhaps, even the idea of fear. Copyright: Raju Peddada, July 2017

Psyche of Saudade by Alex Righetti