Alice Project is a NGO based in Varanasi (Uttar Pradesh, India), known as "Awakening Special Universal Education". Its first aim, infact, is to raise human consciousness and find a solution to the downward trend in new generations. In schools around the world, in fact, every year students have increasing behavior problems
36136 min

“Where is the phenomenon that I perceive?” This question is the basis of the pedagogia started in the ‘80s by the Italian teachers Valentino Giacomin and Luigina De Biasi, and named “Alice Project”. As in the story of Carroll students are invited to follow the wise rabbit, i.e. the path to self- knowledge.

Alice Project is a NGO based in Varanasi (Uttar Pradesh, India), known as “Awakening Special Universal Education”. Its first aim, infact, is to raise human consciousness and find a solution to the downward trend in new generations. In schools around the world, in fact, every year students have increasing behavior problems with decreasing attention and concentration skills, more cases of dyslexia and other learning disorders.In an era of computerization and high speed exchange of information through internet, mobiles, media, western societies are seeing an acceleration in lifestyle resulting in stress and disorders. A final solution seems to be an education that combines Western and Eastern practices.

It is for this reason that the two Italian teachers Luigina De Biasi and Valentino Giacomin have started a research and created the pedagogy method “Alice Project” in 80s: their solution is basically an education that combines Western and Eastern practices, including daily in the classical curriculum also yoga, meditation, ayurveda massages and periodic assessments. After successful experiments, they founded the first school in 1994 in Sarnath.

Alice schools are intercultural and generously open to the lower social classes, their method includes all spiritual teachings with no preferences of religion. Alice project has been studied with scientific method by the University of Benares in order to prove that it can help even the children from the lower classes to bridge the gap towards their peers socially and economically more fortunate. Within a few years, disadvantaged students who had failed in the early verbal and nonverbal tests proposed by the school psychologist, not only have brilliantly recovered the disadvantage compared to socially higher students, but were also able to overcome them. It is proved that in the Alice schools are almost non-existent discipline problems neither cases of students who suffer from hyperactivity and attention disorders or learning disabilities, diseases which instead concerne other countries worldwide. This new path in teaching, learning and human consciousness has been firmly encouraged by Dalai Lama and sustained by private funds, going ahead despite the economic problems.Today, after 20 years of operation, the school has more than a thousand students, and the method is regarded as the “the New Pedagogy of the Third Millenium” from prof .Andrea Bocconi. The Alice schools have also the following purposes: realizing experiences and research of an integrated education in the primary, secondary and senior high school in the rural villages of the two most problematic States of India: Bihar and Uttar Pradesh; to offer to education and instruction of high-quality to the less well-to-do categories; to answer to the requirements of the modern multicultural, multiethnic, and multi-religious societies. 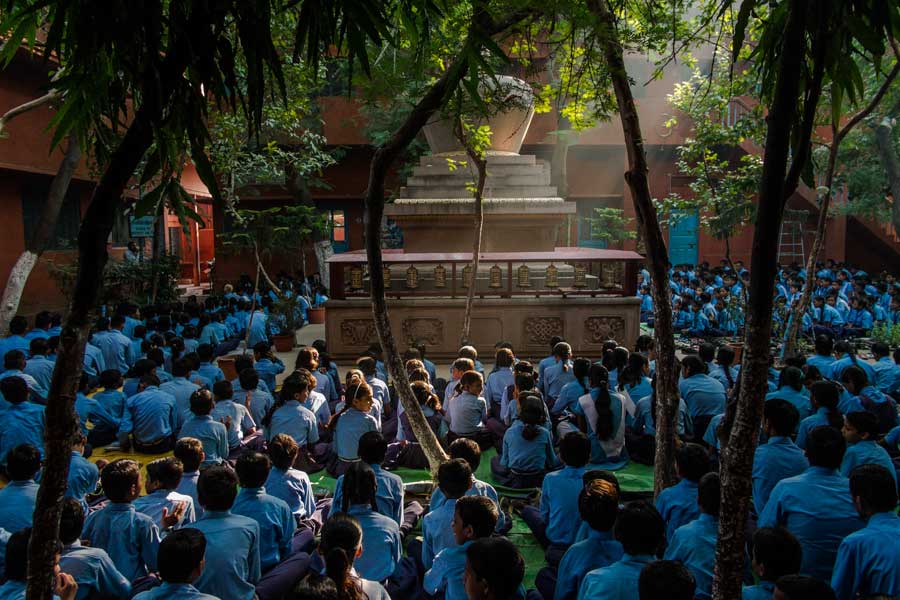 Every morning students gather in a general assembly in the central courtyard of the school for collective prayers and songs. The school of Sarnath in India is the first intercultural and interreligious school of Alice Project, founded in 1994 on the site of the Buddha’s first sermon after his enlightenment. There are other two Alice schools in India: at Bodh Gaya in Bihar and at Bodhisatta Deban village in Arunachal Pradesh. 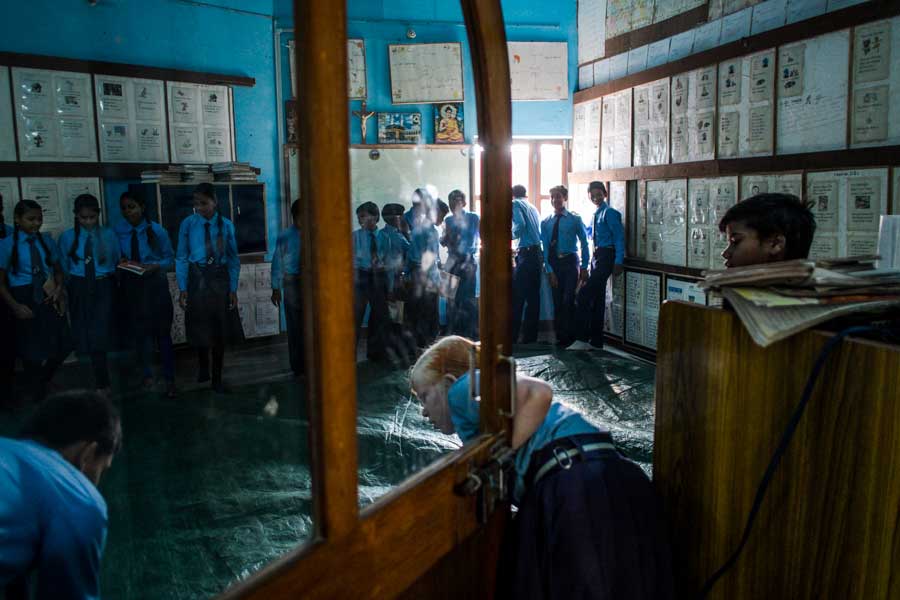 “Alice in Wonderland tells the story of a girl who enters the world of his imagination. She is lucky because doesn’t get lost. We believe it is important to help our students not only to go through the world around them, but also to understand their inner world to not get lost in it.” (Creators of Alice Project) 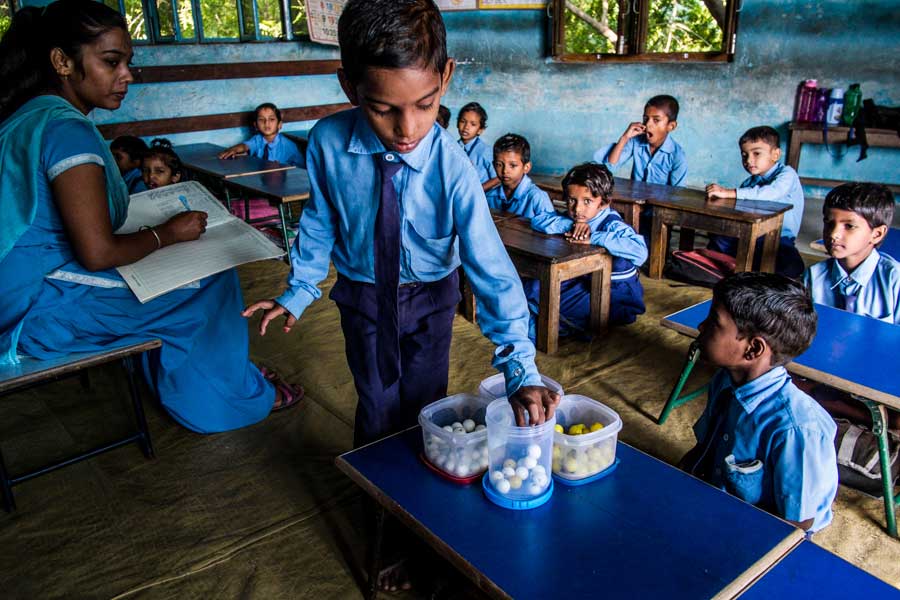 During the roll call, Alice students are invited to choose a small ball, which can be white, yellow or black. Each of these colours represents a particular inner state: positive, medium, negative. In this way the students are daily asked to investigate their inner state and the teacher can deal with it. 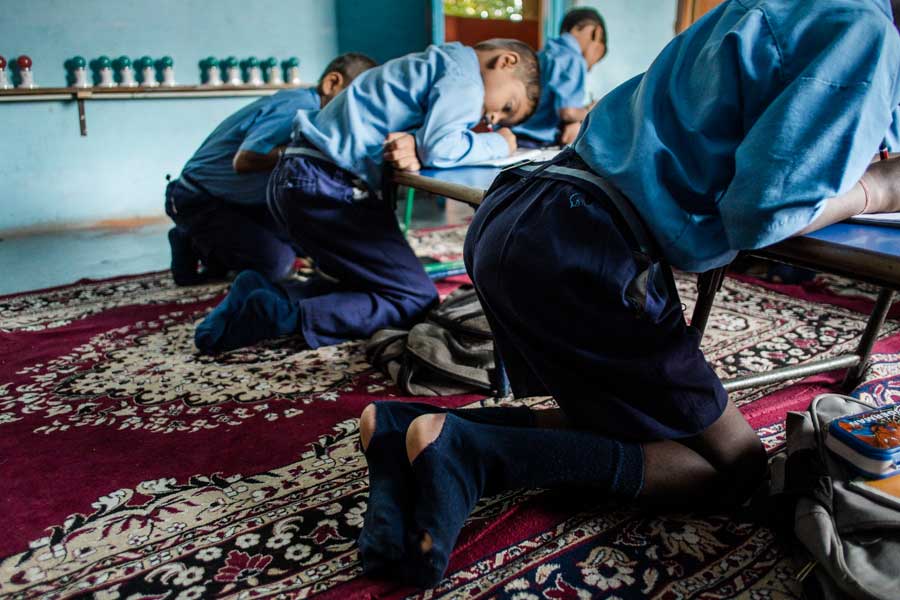 Schools of Alice were born to allow education to the poorest and encourage disadvantaged social classes. The costs of school enrollment are based on the census: the cost ranges of Rs 250 (about 4 euro) monthly to 1 euro; some students are free of cost. The excellent learning outcomes have recently pushed even some higher-class families to enroll their children in Alice schools. 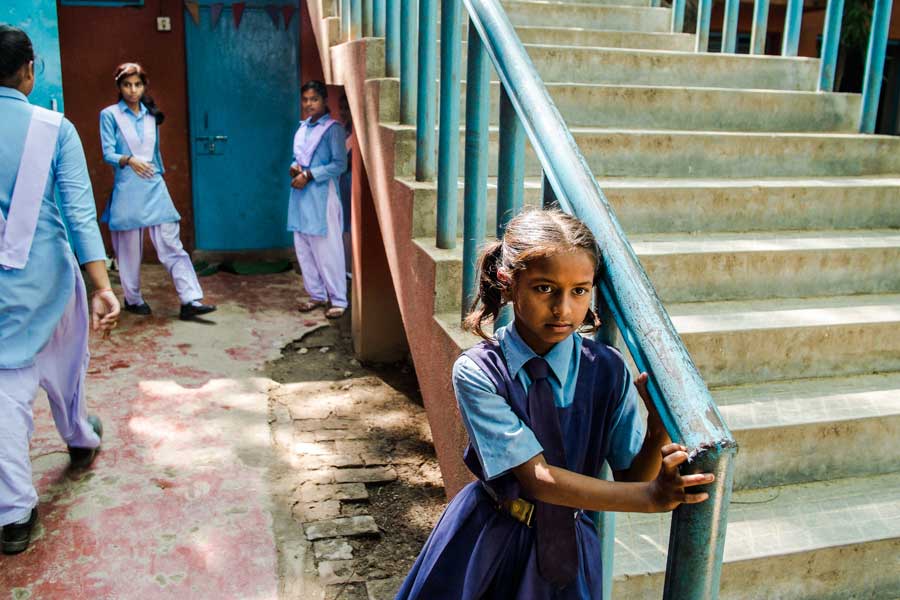 The Alice methodology has been defined “the new pedagogy for the third millennium” by professor Andrea Bocconi, psychotherapist, writer, and an important representative of psychosynthesis in Italy. Also, Shankaracharya, the highest authority of the Hindus,said that “the school illuminates the students’ life, taking them into the divine world that lays in their hearts”. 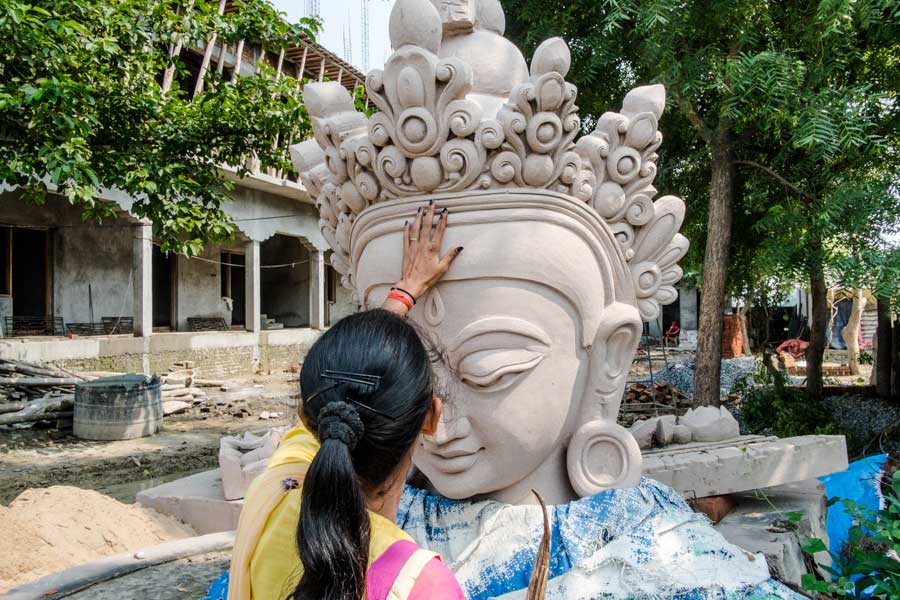 In the garden of the school some Buddhist statues are under construction, while nearby there is a Buddhist temple dedicated to Tara. The school buildings cover an area of about 26,000 square meters and include 22 classrooms, a central courtyard, playground, garden and an agricultural area for growing vegetables. 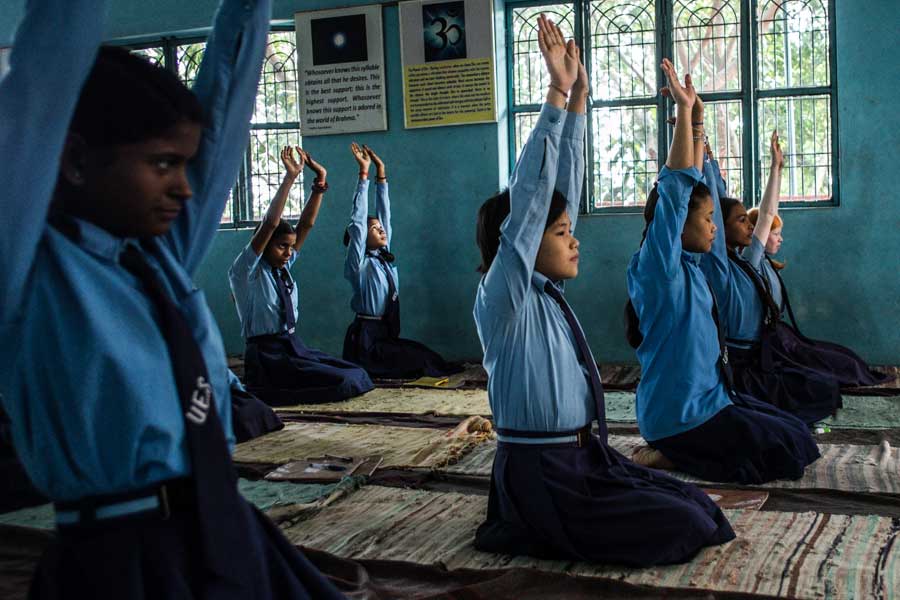 The gym room is used exclusively for Yoga lesson. This practice of “body education” is part of the exercises on attention, perception and self-analysis that over the years have shown an increase in concentration and learning of the students. 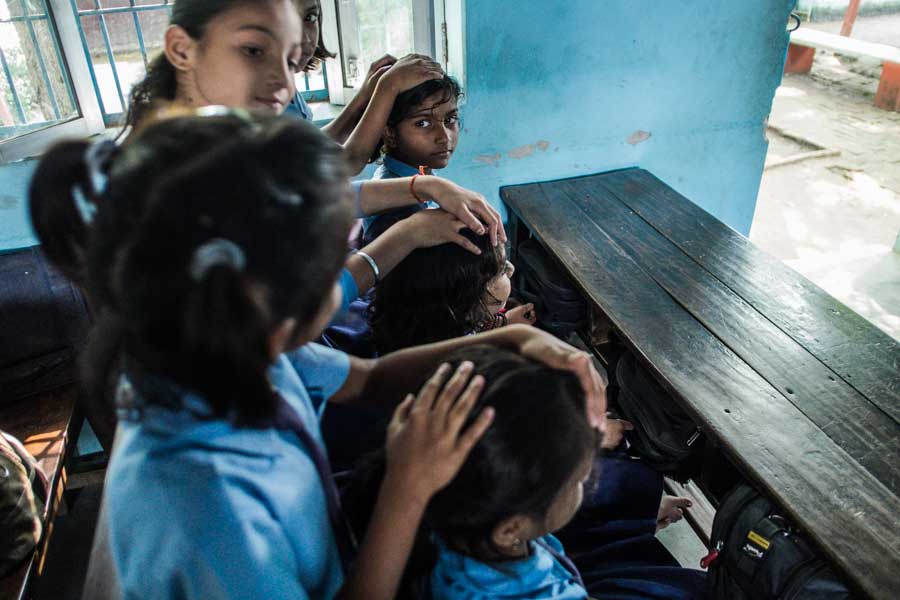 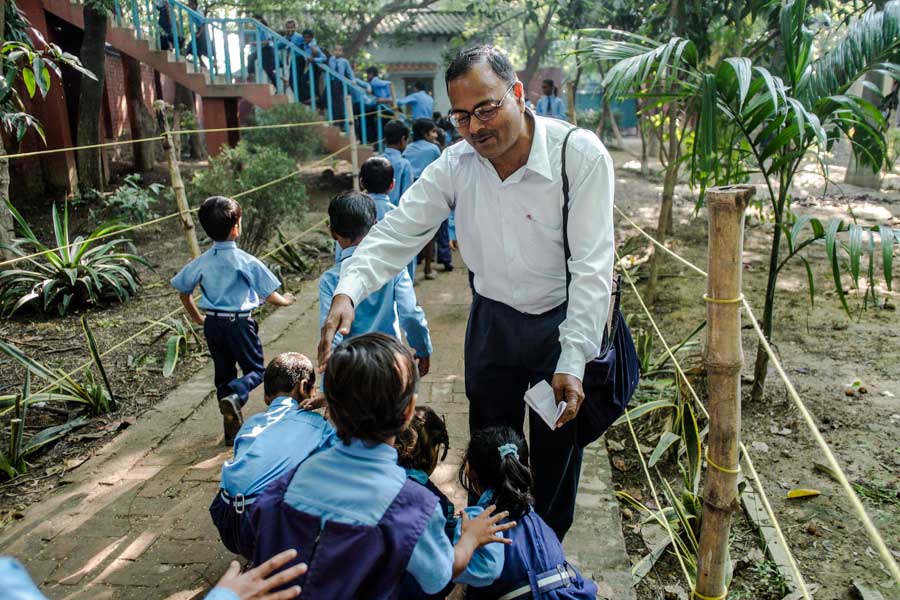 The school in Sarnath currently teaches up to 800 pupils aged between 5 and 18 years. The future plans of Alice concern the opening of two new small schools in two villages near Sarnath, Singhpur and Paterman, and equip schools with a science lab and a computer course. 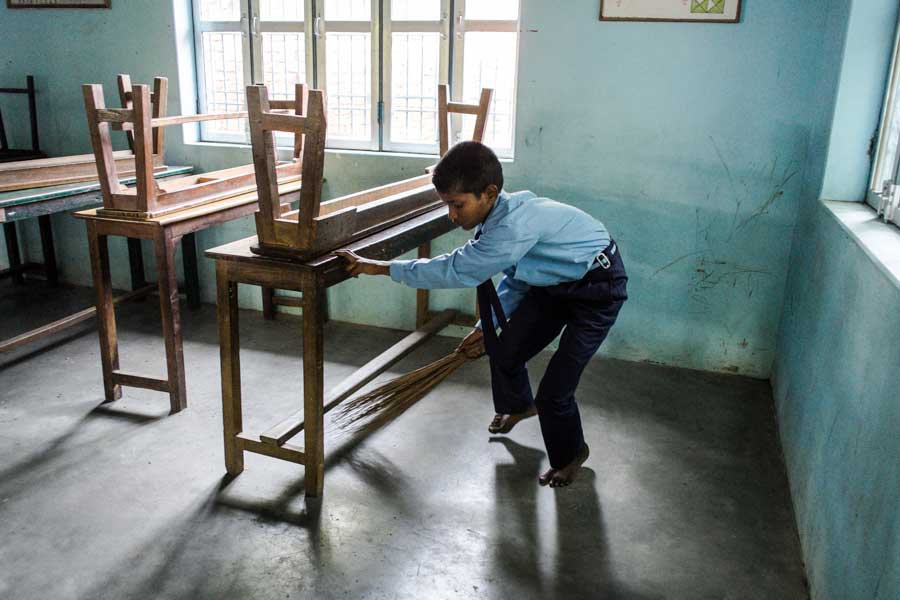 In October 1997 the tests carried out by professor Sharma from the University of Benares, showed a notable improvement in Alice students compared to those from other schools, mostly regarding
attentiveness, memory, awareness, tolerance, and discipline. 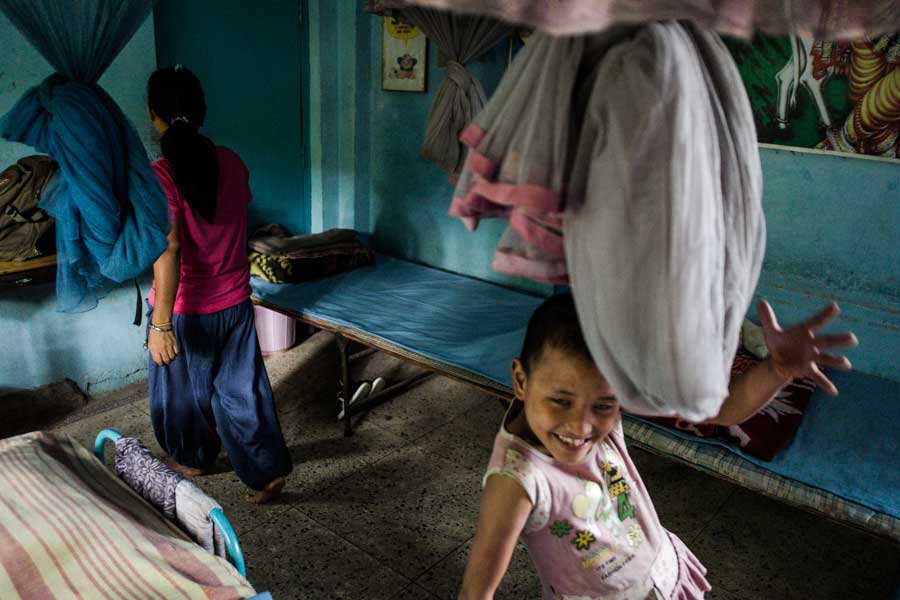 The hostel within the school provides free residence for 42 students, most of them are Chakmas, an ethnicity expelled from Bangladesh because Buddhist and who has never received the Indian passport. For this reason the Chakmas in Sarnath are stateless, live in the school and return home every two years, with a trip that lasts four days.

Maria Cardamone is a freelance photographer from Palermo, Italy. She has been working in photography since 2008. She graduated in 2012 with a thesis on Geography in which analyzed the vision of the geographer Denis Cosgrove who connects the use of aerial photography with mapping, in a cultural/political use of images.

After moving to London in 2012, she has improved her technique skills by working in studio with portrait photographers, and also experienced the develop and print process in a lab. After this training, she has approached documentary photography and photojournalism. Her works are focused on social issues and she has also worked with NGOs in Italy and in India. Recently she has documented the innovative education method “Alice Project”, a useful method to solve learning disorders, bullying and the lack of attention that affect modern societies: with her report “Alice Project: School of Enlightenment” she has received numerous awards in Italy and abroad. Maria is currently working on immigration in Sicily and on the worldwide ecological movement.
Her photographs have been featured in Corriere della sera, La Repubblica, Urban Photography Magazine, Private Magazine, “Don’t Take Pictures” Magazine, F-Stop Magazine, Witness Journal and Social Documentary Network.
Maria has exhibited both in solo and group exhibitions in Italy and abroad. [Official Website]

The residents of the disaster zone by Mlyov