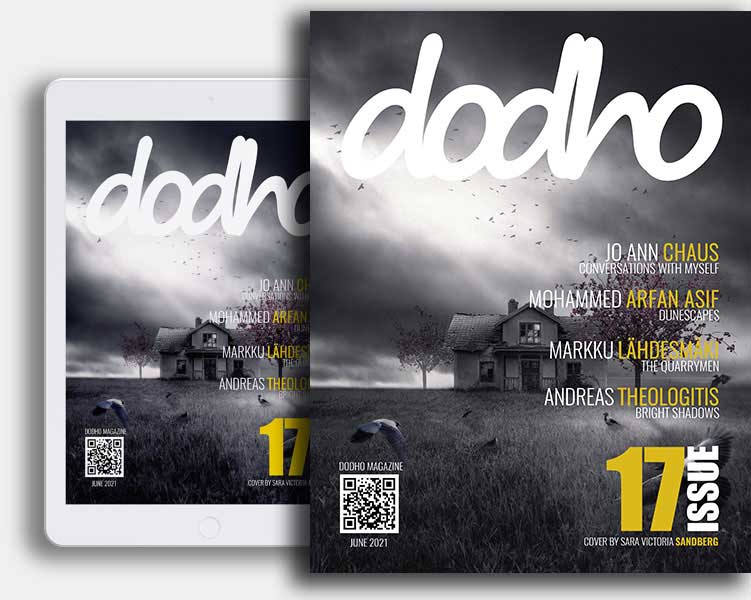 Dimitri Weber | Cover | Dimitri Weber is a 26-year-old French Aerial photographer. Living in Paris and thirsty for nature and travel, he travels the World with his drone to give a new point of view of the latter. After a few years in a photography association at his University, he became really passionate about it during a roadtrip in Australia, where the emptiness of this country gave him inspiration. His main focus: Curvy Roads, and mostly any abstract and weird shapes/colours that can be seen from the sky. Ana Maria Robles | Smoker Women | Thanks to my Mallorcan mother coming to Argentina being very young, I was born here in Buenos Aires, and I have grown up between the country side and the city. I am a Veterinary Doctor (I love nature in all its forms) and a social psychologist. I am currently practising veterinary medicine, producing medicines for animals and social psychology has helped me to connect with my patients ́ owners and with the world. In 2000, I began to study photography, passionate and focused on anthropology and nature. I have had the opportunity to travel a lot across my country and through the world. (America, Africa, Asia, Oceania and a little bit through Europe) Chiara Felmini | The Great Wall | I was born in Turin in 1965, I have been photographing since I was 8, when I got my first camera as a gift from my father. Since then, I never stopped looking at the world from behind the camera’s lens. My interest for the world and the environment grew day by day, together with my passion for travelling. Animals have been a part of my life, as a job and as a passion, for more than 30 years so photographing them was a natural process. Later, my love for travelling made me discover the documentary photography and reportage. I photograph in order to tell stories, for an emotional and aesthetic research. Steff Gruber | Theravada Buddhist Monastery |Steff Gruber (1953) is a Swiss photographer and filmmaker. He worked as a press photographer for Keystone Press and was one of the first filmmakers to deal with the docudrama genre. He became internationally known with his documentary LOCATION AFRICA, about the shooting of Werner Herzog and Klaus Kinski for the film COBRA VERDE. Based on his interest in documentaries, Gruber began shooting photo stories in various countries that focused, in particular, on human interest subjects and humanist concerns. He produced many of his photo series over a period of several years, visiting places and people on repeated occasions. Gavin Smart | The isolation Diary | Gavin Smart is an award-winning freelance photographer. He has a rich and diverse creative background which began with his rigorous musical training, studying the tuba at London’s prestigious Guildhall School of Music. While he no longer plays music professionally, this period of his life gave Gavin the colourful life experiences which continue to shape his photographic process.