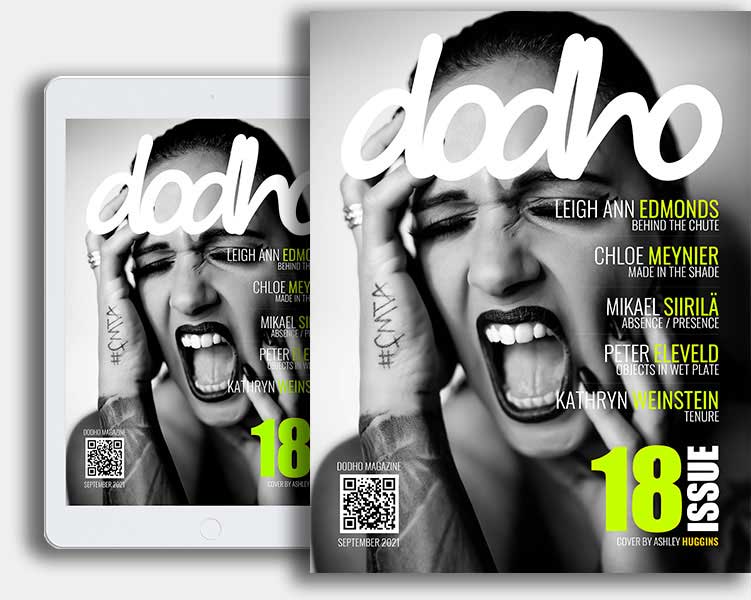 Massimiliano Balo | Cover | Massimiliano Balo was born in Italy. He works and lives in UK. He is a self-taught artist and photography is his passion since he was young however he has begun to make digital art in 2013 when he received his first Honorable Mention at the 3rd Annual Mobile Photography Awards. From then on his works have been appreciated artistically by international expert juries winning important photographic competitions including the Sony World Photography Awards as a shortlisted in 2017. For his way of creating art he recently exhibited in Italy for an exhibition entitled Face 2.0 at “The BID” gallery. His photos create a sense of mood, atmosphere, dream like and drama scenario. The designs lead the eye up, down, and throughout the frame in a way that makes the viewer feel as though they may have walked by these scenes and not noticed them. Andrea Torrei | Home Wilson | Born in Italy and based in Rome, graduated in Political Science in Florence, Andrea Torrei worked for several ngo’s (non governmental organizations) in the social and humanitarian field  traveling in many developing countries.  Always interested in photography, only recently she decided to pursue her passion documenting what she knows and loves most, ordinary people in their daily life with special attention to gender issues and local culture. Her body of work spans from street to documentary photography working mainly on personal projects.  Her work was showcased in several group exhibitions in Italy and abroad. Eric T. Kunsman| Felecific Calculus | Eric T. Kunsman (b. 1975) was born and raised in Bethlehem, Pennsylvania. While in high school, he was heavily influenced by the death of the steel industry and its place in American history. The exposure to the work of Walker Evans during this time hooked Eric onto photography. Eric had the privilege to study under Lou Draper, who became Eric’s most formative mentor. He credits Lou with influencing his approach as an educator, photographer, and contributing human being.Currently, he is a photographer and book artist based out of Rochester, New York. Eric works at the Rochester Institute of Technology (RIT) as a Lecturer for the Visual Communications Studies Department at the National Technical Institute for the Deaf and is an adjunct professor for the School of Photographic Arts & Sciences. Maryam Firuzi | Concealment | Maryam Firuzi is a multimedia artist who works and lives in Tehran. Though her academic education was in Cinema (B.A) and Film Study (M.A), graduating from the Art University in Tehran in 2016, her field of artwork is not confined to filmmaking. She also works as a freelance art photographer and fine artist who likes to examine and experience the medium in which she is working.  Before going to Art University, Maryam had a long journey of self-discovery, trying at first to be a professional painter, then shifting to Persian calligraphy, in which she achieved a Master certification, and finally moved on to creative writing. Many of her poems and short stories have been published in Persian magazines online. During her studies in cinema, she recognized the vast fields of art involved, and decided not just to dedicate herself to one area, but tried to combine the conventions of each. Seunggu Kim | Better days | Born and raised in Seoul, Korea in 1979, Seunggu Kim lives and works in Seoul, South Korea. And he majored in photography in SM university and studied visual art at Korea National University of Arts. He would like to describe how we are living. He thought photography could show our ‘real world’. He wanted to balance the unnatural elements in the rectangle frame and describe that we are getting used to the social ironies of reality. Exhibitions have included Artbit Gallery, Post Territory Ujeongguk, Song Eun Artcube, Aperture Gallery in New York, Format Photography Festival in Derby, Three Shadows Photography Art Centre in Beijing, Gyeonggi Museum of Modern Art, Art Sonje, Song Eun Art Space, Seoul Museum of Art, Seoul, Korea. Ellie Davies | Fires | Ellie Davies (Born 1976) lives in Dorset and works in the woods and forests of Southern England.  She gained her MA in Photography from London College of Communication in 2008. Davies is represented by Patricia Armocida Gallery in Milan, Susan Spiritus Gallery in Newport Beach, California, A.Galerie in Paris and Brussels, Brucie Collections in Kiev and Crane Kalman Brighton Gallery in the UK. Davies recently launched her newest series ‘Fires, 2018’.  Fires 2 has been selected Winner of the Urbanautica Institute Awards 2018: Nature, Environment and Perspectives.  The Fires series was also selected Winner of the 12th Julia Margaret Cameron Award: Professional Landscapes and Seascapes category and the 12th Pollux Awards: Professional Fine Art Series Winner.