American photographer b. 1959. Born Harold L. Gage Jr, (goings by Hal) . From an early age, Hal Gage showed a love of art and music. In high school and college he studied drawing, painting, and music theory and ultimately public communications with an emphasis on television broadcasting.

In 1977, Gage was introduced to photography by his painting mentor, thereafter focusing his interest on photography. Gage has mounted dozens of solo exhibitions and been in hundreds of group exhibitions between 1979 and the present. In 2004 he mounted his first museum exhibition, “Ice: a personal meditation.” It subsequently toured the state of Alaska to museums in Fairbanks, Homer, Juneau, and finally to Portland, OR. In 2011 Gage mounted two followup series titled “Strangers: Tidal Erratics of Turnagain Arm” and “Ice Abstractions” that toured in Alaska. Most recently the series, “Flow: Glacial Silt Patterns” is touring Alaska. It was featured in the LensWork anthology, Seeing in Sixes, and several exhibitions and competitions nationally and internationally.

Hal Gage has published 5 books of his work: Ice: a passage through time; Strangers: Tidal Erratics of Turnagain Arm; Gravel Quarries: Alaska; Urban Dance; and Train Trip. Gage has won several national and international awards including the Sony World Photography Award in landscape photography. He has twice been honored with a Rasmuson Foundation Individual Artist Fellowship, and produced four public art commissions in Alaska and Washington. His work has been exhibited extensively throughout Alaska, and has shown in Canada, Eastern and Western Russia, England, Germany, East Asia, and numerous venues throughout the United States. He lives with his partner the writer Jean Ayers, in Anchorage, Alaska. [Official Website] 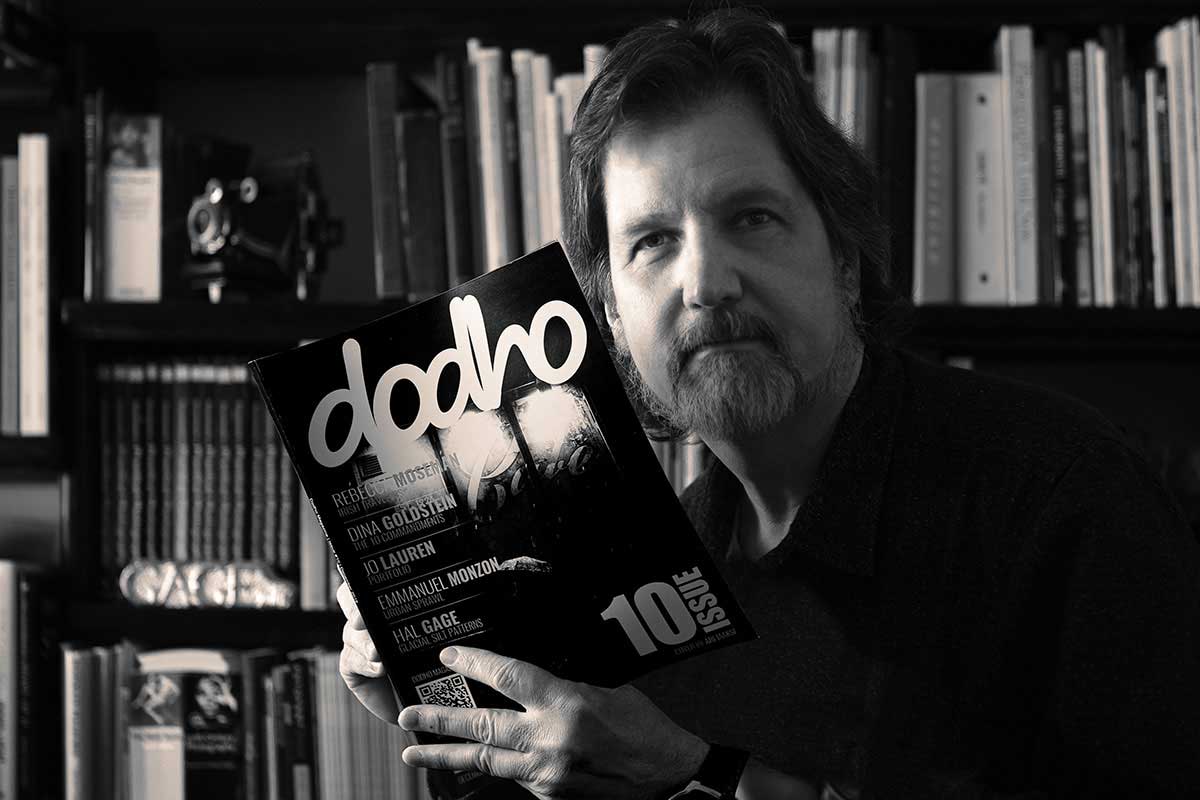 I was born and raised in Alaska. I have travelled the world, but home will always be Alaska. Living here has instilled in me a deep connection to nature. When the land speaks to you, it tells you things about the world around you and about yourself. As I travel the world, I am stunned by the beauty I encounter and shocked at the degradation I all too often find. As an artist, I make images that reflect my experiences both externally and internally. While working among natural landscapes, one cannot help but be moved to action when encountering our own impacts on the land. As a species, our biggest and most dramatic impacts have been in global climate change. Although often subtle and difficult to express visually, it is the one social issue that affects everything. So, with that in mind, all my work has an environmental or social aspect to it.

Nature is obviously of utmost importance to you when looking for specific subjects to photograph. Your ‘Hawaii’ series is particularly interesting when dealing with close-up images of growth and moss. Are these earlier and more abstract compositions together with your background in painting what inevitably led you to create bodies of work like ‘Glacial silt patterns’?

For better or worse I am a pattern guy. I see them everywhere. Finessing them into a rectangular composition is my way of finding order in chaos. I started my artistic life in painting and drawing. In high school I became involved in graphic arts. At university I discovered my love of photography. Each stage informed the other. My work often has a graphic quality to it, and I am heavily influenced by my 2-D design background.

The Glacial Silt Series is a natural culmination of all that. The designs and patterns, which are subtle in-situ, come out later in processing. Once I realized they existed, I could see them and extrapolate what they would look like in the final image, aiding my composing. 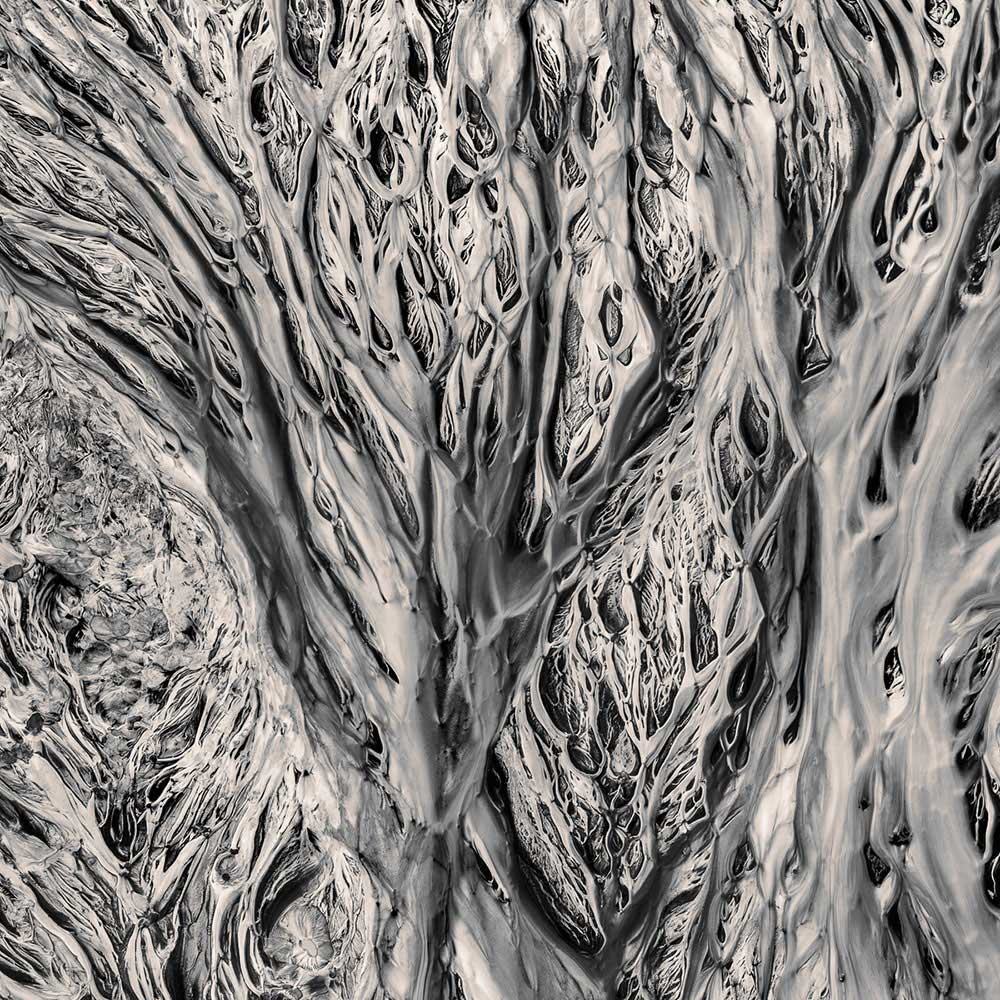 Continuing on from my previous question of focusing on compositions and patterns, I am interested in bodies of work like ‘California’ and the various black and white desert images. Could you tell us a little bit about how you came to shoot these images and what drew you to find compositions within this landscape?

The sand dunes of Oceano, California have been a perennial subject with West Coast Landscape school of photography giants like Edward and Brett Weston, Ansel Adams, Winn Bullock and Morley Baer. It’s a form of pilgrimage. Once I found the location (which was no small feat), I worked in the late afternoon sun and at sunrise to get the best contrast. Because they are on the Pacific coast, the wind continually sculpts these dunes and erases all traces of man or animal’s trespass. I like to work low and expand my composition to the horizon. This makes for both grand landscapes and intimate detail studies. The textures and patterns are a natural magnet for my eye.

Moving on to your most recent body of work published in Dodho magazine’s 10th edition, this project not only showcases the power of slow-moving glaciers but aims to discuss the global ramifications of rising temperatures. Are you currently invested in creating photographic projects that deal with more environmental issues like this?

For the last 30 years, I have focused a great deal of my artistic energies on photographing ice and the environment it is found in. Glacier ice was a natural part of that series. Once I felt good about my survey on that subject, I looked for anything else I could say about glaciers and the state of our environment. After looking at the towering walls of glacial ice and all its intricate patterns and shapes, I looked to my feet. There I found a microcosm of the grander structure of rivers, canyons and alluvial fans that enshrine the earth at a human and global scale. These flowing rivulets are emblematic of the demise of the glacier that was its source. Their intricate patterns put me in mind of fingerprints, the last vestige of a once majestic glacier.

I continue to work in this vein. Although I photograph all that I see and come upon, there is always an eye toward making images that express my concern and alarm of environmental issues. 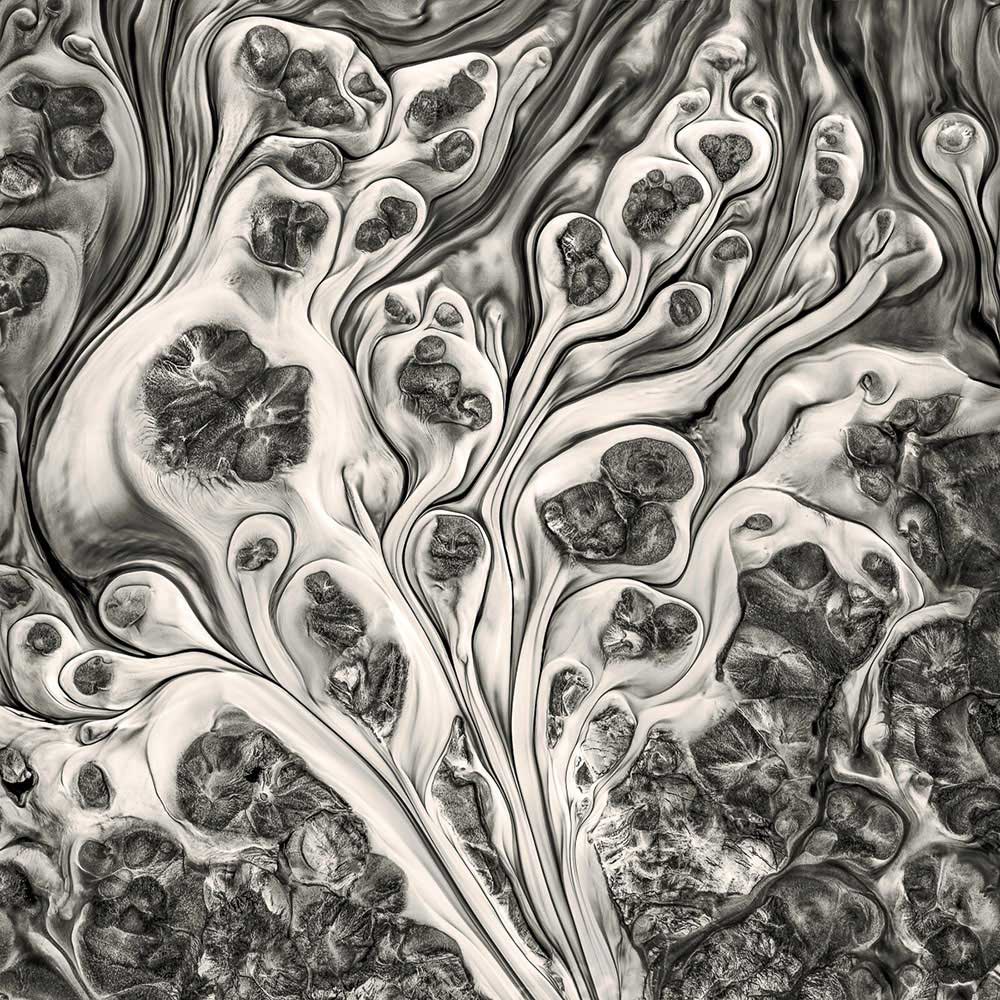 At first glance the photographs themselves are somewhat alien in nature and notions of the desolate landscape spring to mind. The images under this body of work are fluid in movement, and in my opinion feel like photographs that could transition into video. Are you open to the possibility of exploring video and continuing with this project, or is this more about your interest in highlighting an environmental issue?

I appreciate the insight, but I am a still photographer and have no interest in videography. Oddly, that was my major at university: video production and television broadcasting, but I never pursued that in my work life. I’ll leave video to others who come across this phenomenon and feel so moved.

But, to your insight: these images are of moments in time. They are constantly changing and morphing within milliseconds. They would make for interesting and probably mesmerizing short movies. It’s that quality that makes them very difficult to photograph with a still camera. Viewers often mistake these images as time exposures, but the opposite is true. They are made with short shutter speeds to keep the detail sharp.

I’d also like to know a little bit about the technicality of this project, what gear was used, if you encountered any problems while shooting and the planning of location(s)?

The glacial silt patterns were all photographed at the Matanuska Glacier in South Central Alaska. Because of the subject’s reflective qualities, I had to photograph on completely clear sky days so as not to get reflections of clouds. Or, for the more extreme closeups, I used a black covering to eliminate reflections. I use a Canon 1Ds mk 3 with a 100mm macro lens on a sturdy tripod. In this situation, polarizers didn’t have much effect, so I did not use any filters. I used Lightroom and Photoshop to process and print the images.

The best patterns are usually found on long flat gently sloping sheets of ice. The glacial runoff of ground-up rock (known as glacial flour) and high valley soils commingles with the melting glacial waters and creates these vast fields of mud, usually only a few centimetres deep. Because I am walking on a glacier, I wear crampons. Serendipitously, the spikes of the crampons raise my boots above the surface of the mud (which is sticky and can, if buried deep enough, make it nearly impossible to get your boot out).

Concluding this interview, I would like to ask you about any future projects that are in the works and if you are planning on continuing an investigation of glaciers and the natural landscape?

I feel that my work with glaciers and ice in general has come to a close. Old habits die hard, and I will probably continue to make images of that nature, but I feel that I have said what I want to say on that subject. What does the future hold? Some subjects include documenting abandoned salmon canneries in remote Alaska, altered landscapes by man for recreational uses, plus other ideas that have not made themselves apparent yet in my work. My bodies of work grow organically. From time to time I’ll look back through my catalogue of images and look for emerging patterns and collections. From there I’ll focus on that theme and fill it out over time until I feel I have a cogent statement to make. It keeps life interesting. 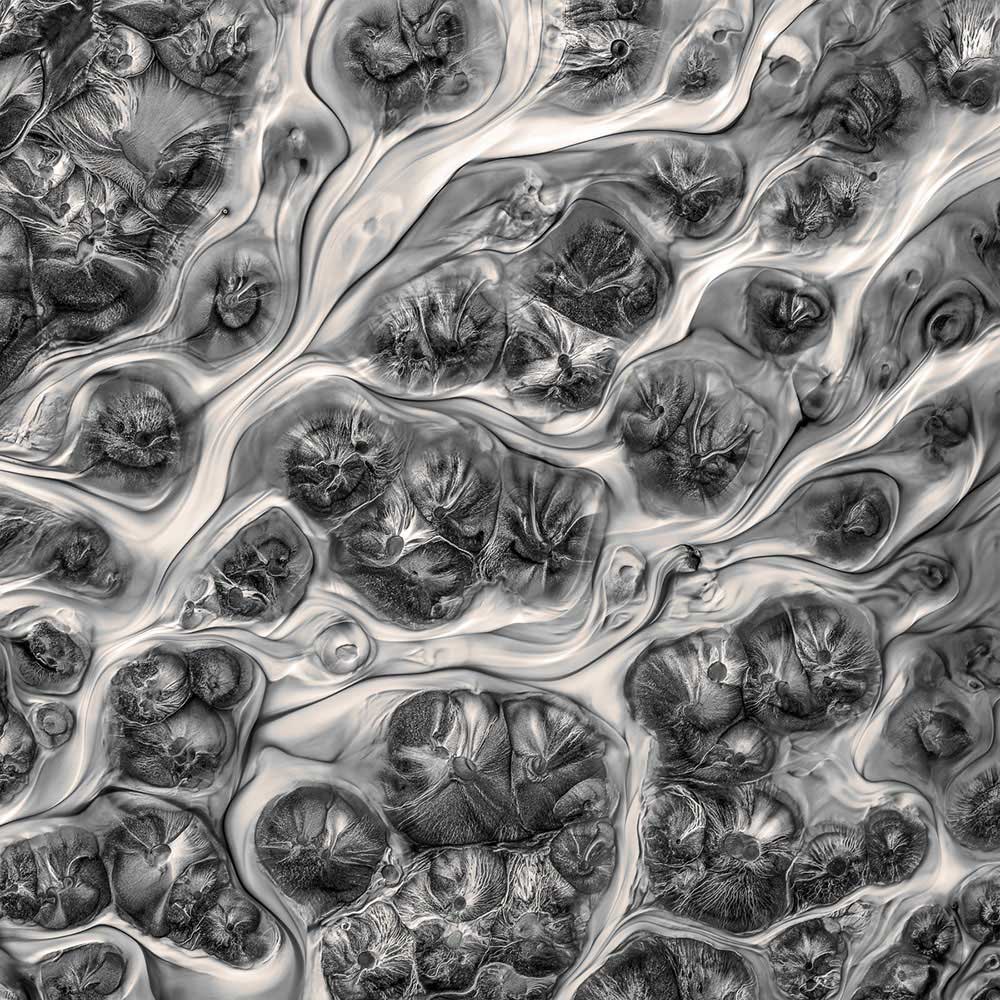 Photochemistry : Pears in the afternoon by Karoline Schneider